There are many ways to create a 3D Earth that is rotatable (see here, here, related here), but most of them have some drawbacks. These issues mainly stem from either CountryData or the fact that 3D shapes are not easy to handle. How can one efficiently overcome these problems? How to create a 3D rotateable, high-resolution-textured or polyon-based, fast-response, good-looking Earth?

Specific problem to solve: Given a 3D Earth, how can a 2D plot be layered on the surface such that only those parts of the plot appear that are above continents?

In other words: How to plot a species' distribution over the globe? My present method is quite tedious and is really slow. It involves the creation of a continent-texture map, the rasterization of some random distribution patches (any will suffice, mine is taken from here), some image-processing algorithm to color the intersection of continents and the distribution (as Mathematica lacks proper polygon-intersection tools at the moment), and projecting the result over the sphere. This has various problems apart from slowness (see below the example). Following is a test-creature that was obliterated from the Italian Peninsula. 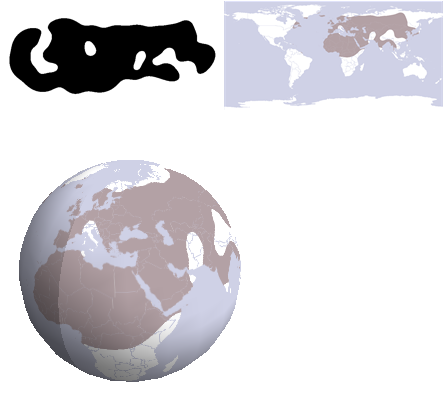 Here I list the methods known to me to create the globe, and their shortcomings:

Extract 2D polygon data for each country & continent from CountryData, convert them to 3D and project coordinates to a sphere. Issues: 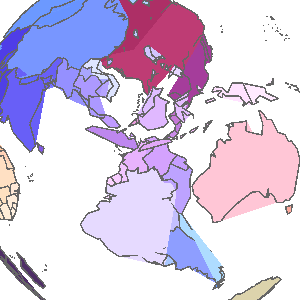 2. Make a texture bitmap and project it onto a sphere

Create a high-resolution 2D map of the world, and apply it to e.g. SphericalPlot3D. It produces a globe that can be rotated quite easily, though it has other issues:

Various artefacts in Mark's answer, when zoomed on to the South Pole: 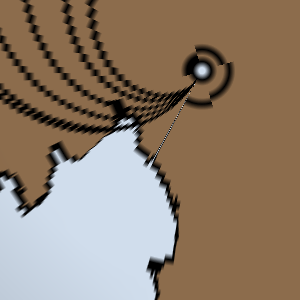 Note polygon spiral-lines (polygon issue, can be cured by rasterization); low resolution (can be increased, but not to a level when zooming on like this does not reveal pixels); the alignment issue at the surface boundary (thin blue line pointing to the pole) due to 3D plotting; and the blue point right at the pole (projection issue).

This is a hypothetic way I haven't tried. First, create a large bitmap of the world. Tile the space periodically with it, and use an orthographic projection to simulate a 3D sphere-like lens effect whenever the map is dragged by the mouse. By this way 3D can be simulated in 2D. Could be faster than the texture mapped sphere.

Why is it that many geographic features are not shown consistently by CountryData? I would assume this returns a full world map, but I guess since Antarctica is not a sovereign country, it is omitted:

But I cannot explain the missing features of the second plot below (e.g. Alaska). How come that the "Polygon" specification, that is supposed to be more detailed than "SchematicPolygon", is actually missing features the other has? 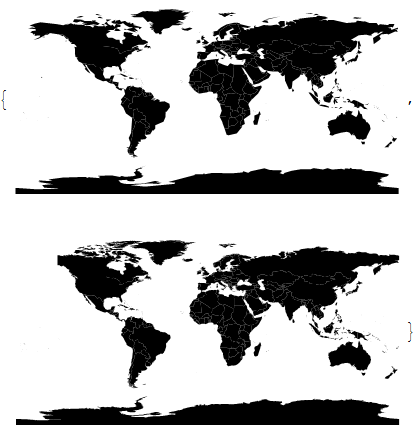 This answer was originally posted in 2012 and based on version 8 of Mathematica. Since then, a number of changes have made it possible to generate the globe in much less code. Specifically:

Thus, we can now generate the globe as follows: 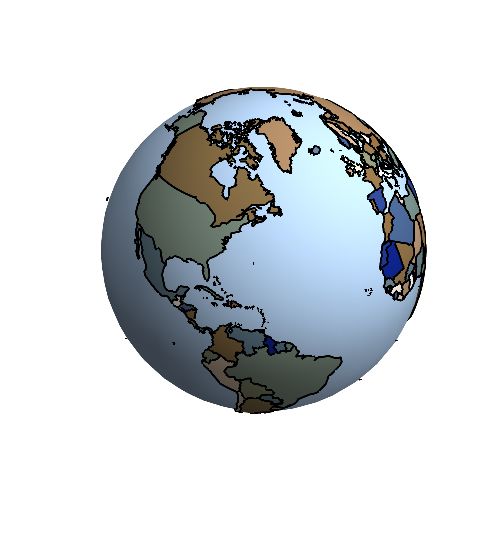 I'm posting this as a second answer, as it's really a completely different approach. It's also been substantially expanded as of April 25, 2012. While this still doesn't specifically address the question of adding a region, it does plot the countries separately. Of course, each country could be viewed as a region in itself.

Our objective is to make a good, genuine 3D globe. We prefer not to use a texturized parametric plot, for then we we'll have distortion at the poles and no access to the graphics primitives making the image.

It's quite easy to project data given as (lat,lng) pairs onto a sphere using GeoPosition and related functions (or even just the standard parametrization of a sphere). However, the SchematicPolygon returned by CountryData are of insufficient resolution to generate a truly nice image while the FullPolygons are so detailed that the resulting 3D object is clunky to interact with. Furthermore, non-convex 3D polygons tend to render poorly in Mathematica with the fill leaking out.

Our solution is two-fold. First, we simplify the FullPolygons to a manageable but still detailed level. Second, we triangulate the resulting polygons before projecting onto the sphere. Note that we use a third party program called triangle for the triangulation. Once installed, however, the procedure can be carried out entirely within Mathematica using the Run command.

Here are the Schematic and Full Polygons returned by CountryData for Britain, known for it's complicated coastline. Note that the FullPolygon consists of nearly 4000 total points, while the SchematicPolygon has only 26.

In order to plot a nice image that is easy to interact with, we've really got to reduce the number of points in the FullPolygon. A standard algorithm for reducing points while maintaining the integrity of the line is the Douglas-Peucker algorithm. Here is an implementation in Mathematica:

Let's illustrate with the coast of Britain. The second parameter is a tolerance; a smaller tolerance yields a better approximation but uses more points. The implementation doesn't like the first and last points to be the same, hence we use Most. Finally, we can toss out parts that yield just two points after simplification, since they will be very small.

The result has only 341 total points. Let's look at the mainland.

Our simplified polygon uses only 158 points for mainland Britain to yield an approximation that should look good on a globe.

Triangulation is an extremely important topic in computational geometry and still a topic in current research. Our topic here illustrates it's importance in computer graphics; it is also very important in the numerical solution of PDEs. It is surprisingly hard to do well in full generality. (Consider, for example, that our simplified polygons are not guaranteed to be simple, i.e. they may and probably do self-intersect.) Unfortunately, Mathematica doesn't have a built in triangulation procedure as of V8. Rather than start from scratch, I've written a little interface to the freely available program called triangle: http://www.cs.cmu.edu/~quake/triangle.html

Installing triangle on a unix based system, like Mac OS X, was easy enough for me - though, it does require some facility with C compilation. I don't know about Windows. Once you've got it set up to run from the command line, we can access it easily enough through Mathematica's Run command by reading and writing triangle files. Let's illustrate with the boundary of Britain again.

For example, we can write poly files for the british coast approximations as follows.

This produces new poly files as well as node and ele files. These can be read back in and translated to GraphicsComplexs.

OK, let's put this all together to generate the globe. The procedure will generate a huge number of files, so let's set up a directory in which to store them. (Unix specific)

The next command is analogous to the toPolyFile command above, but accepts a country name as a string, generates poly files for all the large enough sub-parts, and triangulates them.

Next, we need a command to read in a triangulated country (consisting of potentially many polygons) and store the result in a GraphicsComplex. 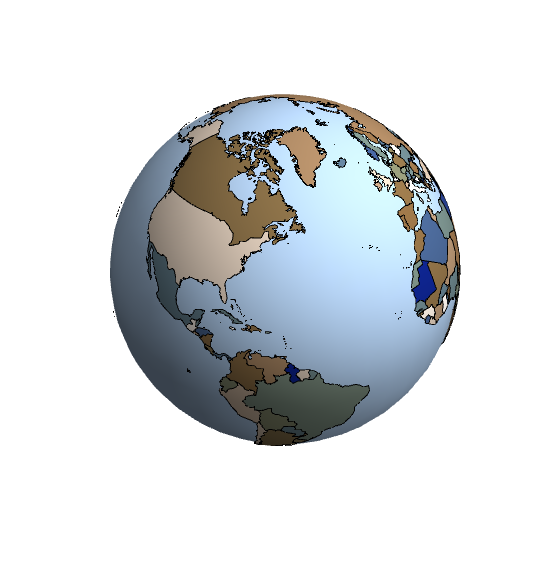 This is not a direct response to the question but rather a response to Istvan's comment to FJRA answer. As Istvan points out, the 3D globe has "artefacts like excess polygon-parts". An alternative approach is to use ParametricPlot3D together with a 2D map as a texture. Here's the result. 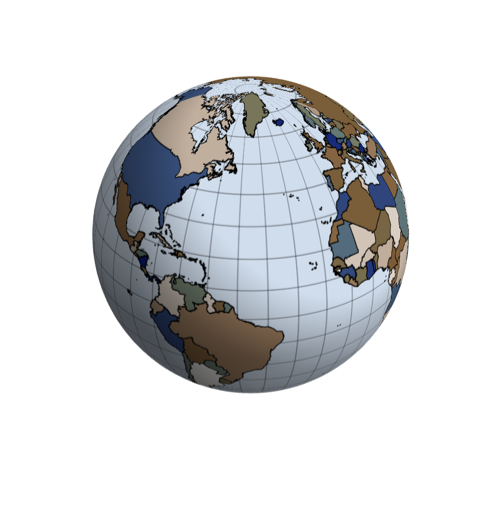 Well, you’ve clearly established that they’re no set–subset relationship between SchematicPolygon and Polygon. One can only speculate as to why that is, but the fact remains that this behaviour of Polygon is documented: “Main boundaries [i.e. Polygon] exclude entities such as outlying islands and dependencies.”

It is desirable at least for some purposes to have a polygon of the mainland of a country, e.g. to avoid spreading a country’s color to its overseas islands and make the map less readable. Also, to be able to plot the country on a local basis, as a connected set (if you don't draw the rest of the world).

If you want quick graphics (including country borders) you should use:

6
How can I put an image on a surface
90
How to make an inkblot?
59
How do I plot coordinates (latitude and longitude pairs) on a geographic map?
34
How to make a 3D topographic globe?
26
Composition: how to make a day and night world map?
18
Quirk in VertexColors interpolation when displaying Polygon
18
How to find the outline of a country given the imperfect outlines of its administrative subdivisions?
35
Calculating a potential function using the finite element method
5
How to plot the 3D-boundary of California or other states
10
Pixel perfect world map with no border lines
See more linked questions

14
How does Mathematica know my location?
11
How to combine more locations (GPS coordinates inside one city) with Google map?
34
How to make a 3D topographic globe?
5
How can I use multiple Textures in Graphics3D
8
How do I plot my country map with weather data stations?
6
Make a 3D geographics with boundary of province
4
Pretty Globe Plot - Custom SliceDensityPlot3D
1
How can I list the capital cities ending with video?
10
How to find what you want in curated data?