Combining an imported PDB file with a set of Graphics3D objects

Imagine we import a PDB file like so (using the example from ref/format/PDB in the help directory):

The help file says that it should be possible to treat the imported PDB image as a Graphics3D object, but I can't seem to get it to display with other Graphics3D objects after using Import with the specification:

How would I scale and translate an imported PDB graphic and get it to display with other Graphics3D objects, like say a cylinder or sphere?

Use Axes -> True to get an idea of the scale: 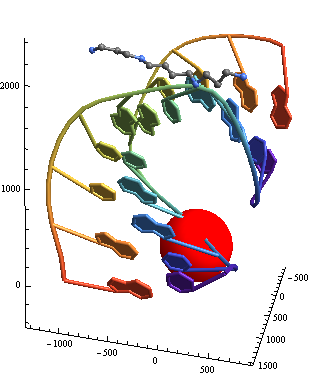 Not the answer you're looking for? Browse other questions tagged graphics import graphics3d or ask your own question.

12
How to get MATLAB data imported with the same dimensions?
9
Combining Image3D and Graphics3D
4
Modifying imported 3D file
8
Graphics3D: Objects with holes
13
How to display MeshRegion without vertices
5
PDB Graphics Options: Opacity and Scale to superimpose on 3D point plot
2
modifying graphics3D objects after their creation
1
Combining Graphics, Graphics3D, and ParametricPlot3D
1
MapThread conflicting with DynamicModule