As my differential function is relatively complex I do not want to do the detour of finding an explicit solution via DSolve for it but rather use an FindRoot-like approach by guessing initial starting values.

Let z[t] be the differential where the start and end values are known:

The (simplified) differential (where the paths of l2[t]and l3[t] as well as their end values l2final and l3final are well-defined) is:

The only unkown is tmax. So I don't want to do the DSolve described as I don't care about an explicit solution of z[t]. But I rather want to search for something like:

Does anybody have an idea how to combine both approaches EFFICIENTLY?

It helps to give code that can reproduce you're problem, but here's a guess at what you're after. I removed the conditions l2[tmax]==l2final, l30[tmax]==l3final because if l2 and l3 are well defined and tmax is defined by z[tmax] == tend, then l2final and l3final are determined by the result. 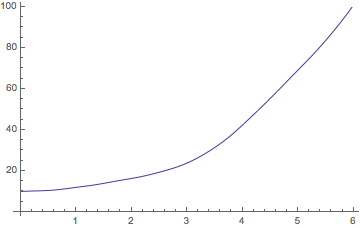 2
How to address the domain of an outputed interpolating function

14
How to correctly use DSolve when the force is an impulse (dirac delta) and initial conditions are not zero
1
DSolve, Simultaneous Eqns + Piece-wise + boundary and initial conditions
11
Differences between DSolve and NDSolve
0
Table with solutions of NDSolveValue and FindRoot for each parameter value
0
Plotting output from method of characteristics - travelling wave solutions