I would like to get both to work together, so the slider 'draws' the plot, as does the locator when it is dragged. Here is an illustration of what I am trying to achieve:

Update for V10+. The control for t can now be constructed with TrackingFunction:

How to write custom controls is discussed in Advanced Manipulate Functionality. Custom controls are declared in a Manipulate by pure Functions, often used in the form ctrl[##] &. Manipulate passes several arguments to the control. The first argument is Dynamic[t], where t is the control's variable. The second argument is generally a List of the data that appears in the variable declaration (e.g. {0.001, 20} in the control for t). Any other arguments are usually options. We needed to override just the first argument with a custom Dynamic. The rest of the arguments, represented by ##2, are passed as is. In this case, one could use #2 instead of ##2; one could also explicitly pass {0.001, 20} and skip the # slots altogether.

The custom Dynamic links the slider to the locator: The locator's x coordinate is reset whenever the slider is moved. The link from the locator back to t is done in the body of the Manipulate by t = x0.

Finally, the way dynamic updating works can be subtle. If a symbol var is being tracked and the value of var is changed in the body of the Manipulate during an update, another update will be generated; this causes the body to be executed a again. (Sometimes this leads to infinite loops.) If t were a tracked symbol, then the Manipulate body would execute twice each time the control or locator was moved. (On the second evaluation, t is set to its old value, so a new update is not generated.) For this reason, I excluded it from being tracked by means of the TrackedSymbols option. The way it is now is that if the t slider is moved both t and p change values; the change in p causes an update and the graph is redrawn. And if p changes by clicking on the graph, an update is generated that changes t and redraws the graph.

In your previous question we connected the slider to the locator.

Now we change the plot domain: Instead of plotting from 0 all the way to 20 we only plot up to x0. We don't want the plotted region to change, so we use the PlotRange option (see the documentation center)

This a example when I start learning Mathematica.I hope it can help you.Good luck. 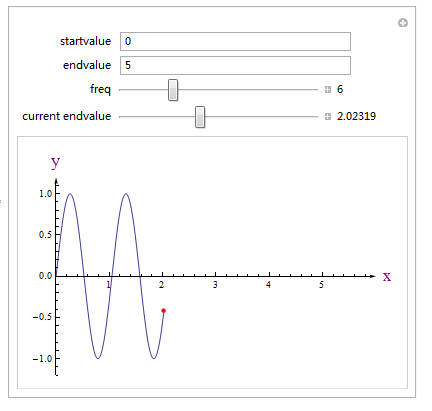 Not the answer you're looking for? Browse other questions tagged plotting manipulate locator or ask your own question.

6
How to restrict the motion of a Manipulate-generated Locator along a line?
5
Two-way locator & slider controls