What is a type in Wolfram Mathematica programming language?

"Everything is an expression" is a popular citation from many Mathematica guidebooks. So, what is type in Mathematica? How does it relate to common types from Haskell, for example?

I did some simulation of dependent types:

I have received an array types of symbols that are constrained with pattern checking rules. Is it a family of types?

The nearest Mathematica has to "types" are Heads of expressions that are Atoms. For example:

There are also somewhat different "types" in the context of Compile.

In Mathematica, the type of a built-in object is represented by the Head. For example, Head[3] is Integer, Head[1.5] is Real and Head[a] is Symbol (assuming that a hasn't been assigned a value, of course, because in that case, you'll get the Head of that value).

Note that for expressions of the form foo[bar,baz], the head is foo. Most expressions are internally represented in such a form, as can be seen by applying FullForm, for example:

and consequently the Head gives List in the first case, and Plus in the second case.

Note that Mathematica evaluates the expression given to Head if possible, so the result of Head[1+2] is not Plus but Integer because Head is replaced only after evaluating 1+2 which gives the value 3 of type Integer. On the other hand, Head[a+b] gives Plus (assuming neither a nor b have any applicable definition), because a+b is "inert" under evaluation: There are no evaluation rules which could applied to it, therefore it is self-evaluating. Note that the same is true for head replacing (Apply, @@). Also note in that context that Mathematica, unlike the typical functional language, continues evaluation until it reaches an "inert" expression which cannot be further evaluated. This is best demonstrated by the following Mathematica code:

Here in the first step, Mathematica evaluates foo, which evaluates to bar. But it doesn't stop there, but continues to evaluate bar which gives the result 3. Now that result cannot be further evaluated, and therefore is given as the result. On the other hand, the seemingly equivalent Lisp code

will evaluate to bar because after evaluating foo to bar, Lisp doesn't try to re-evaluate.

To see how this interacts with head replacing, consider the following code:

Note that you can prevent Mathematica from evaluating an argument before calling a function by using Unevaluated. For example, Head[Unevaluated[Range[1,5]]] gives Range, and Plus@@Unevaluated[Range[1,5]] gives 6 (because the Range got replaced by Plus, and then the resulting expression is evaluated). In this respect, Unevaluated is similar to Lisp's quote. Note however that due to Mathematica's continuing evaluation, the effects can be drastically different. For example, consider the code

You might expect this to return 1+1 unevaluated, just like the corresponding Lisp code with quote does. However while Unevaluated indeed causes 1+1 to be passed to f without further evaluation, applying the definition of f results in 1+1 (note: without the Unevaluated!), which Mathematica continues to evaluate, resulting in 2.

Since Mathematica 10, there is the TypeSystem` Context, that is nearly what you might be looking for. It is just a wrapper around patterns.

It is the thing being used internally by Dataset-related functions. (Maybe one should say something like Dataset[{}] first to beable to use the TypeSystem; I’m too lazy to check again whether it is necessary.)

Unfortunately, it is not documented but you can figure it out looking at names in ?TypeSystem`* and at GeneralUtilities`PrintDefinitions @ TypeSystem`Validation`PackagePrivate`vtor.

TypeSystem`Either is (was?) not working as expected, but see my patch.

In Mathematica, values are expressions.

Types in computer science are collections of values.

Perhaps a type in Mathematica could be viewed as a pattern which matches a certain class of expressions.

Programming language designers often classify values according to the different roles that different types of values are allowed to play in that language. For example, in functional languages, functions are often described as "first-class citizens" because they can be passed as parameters to functions and returned as values from functions, much like atomic data types such as integers and strings.

Mathematica is very flexible in that (like S-expressions in LISP) values can play any role for which meaningful transformation rules are defined that match those values (perhaps as part of a larger expression). Viewing types as patterns that describe the class of expressions that the pattern matches, one could ask what does it mean then to "instantiate" a value of a certain type in Mathematica ... in analogy to instantiating an object (i.e. a value) in say Java of the abstract data type described by the class definition?

When the kernel reads in any expression that matches that pattern (even if no explicit pattern matching is requested) one could say that a value of the pattern type has been instantiated (through the act of parsing the expression). So here is one sense in which the notion of types as patterns may be a little more general than how this term is used in other programming languages like Java. The pattern-as-type notion of type allows one to test for type membership, which is useful for verifying program correctness, making internal optimizations, etc. But it is also possible to instantiate a value of a given type (actually of an infinite number of different types) without ever defining the type (i.e. specifying a pattern that matches the type) explicitly as in a class definition.

So in Mathematica, all conceivable types already exist implicitly (which perhaps helps clarify the Wolfram quote in the response to the OP). The patterns are then like names that explicitly describe types when one wants to use them for testing say membership in a certain class of expressions defined by the type pattern ... perhaps much like lambda expressions name the anonymous functions that they define at time and place of use.

Or maybe not ... anyone else have any thoughts here?

Not the answer you're looking for? Browse other questions tagged programming symbolic or ask your own question. 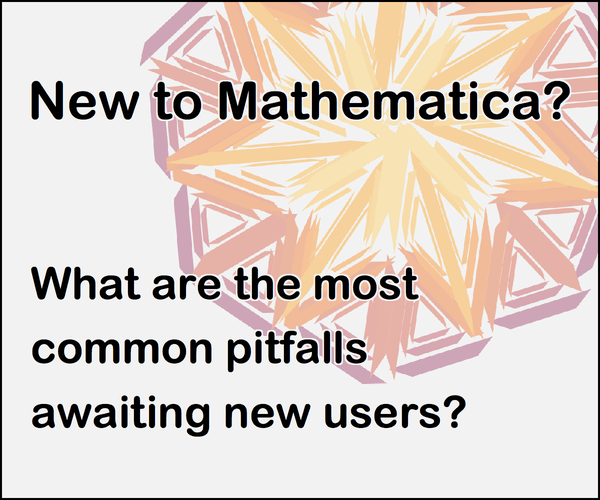 33
Does every Symbol in Mathematica induce a monad?