Is everything in Mathematica ultimately stored as a rule?

My current understanding about Mathematica is that everything, at the lowest level, ends up as replacement rules.
First question: is this true?
Second question: does Mathematica "gloss over" these rules by representing them as functions? 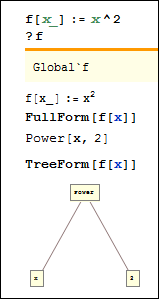 doesn't seem to be expressed as a rule.

Third question: does the by value/by reference question have any when you "pass" a value to a Mathematica function?

When you define a function f, you are (a) applying Set or SetDelayed to a pattern, (b) creating a rule, (c) associating the rule with a symbol (f), and (d) storing that in DownValues (usually).

First question: is it true that "everything in Mathematica is ultimately stored as a rule?"

No: for example 2 is not a rule. It's just 2. So not everything is a rule, just functions. Everything is an expression, ... some expressions (as a side-effect) create and store rules in DownValues.

Second question: does Mathematica "gloss over" these rules by representing them as functions?

Yes and no. They give you a glossy shortcut for input:

There was one misunderstanding in your question; you asked about the output of

If you want to see the definition of f you should either use Information (which is glossy and not very useful) or DownValues which contains what you're after.

Third question: does the by value/by reference question have any when you "pass" a value to a Mathematica function?

Work on the assumption that Mathematica is pretty smart "under the hood" about pass by value/ pass by reference.

Not the answer you're looking for? Browse other questions tagged functions replacement core-language or ask your own question.

0
Can we say that “all functions in Mathematica are some kind of pattern-matching-and-replacement procedures”?
98
What is the difference between Reduce and Solve?
17
Distinguishing Wolfram Language and Mathematica, the software

9
Mathematica rule substitution memory
14
rule-based implementation of an algorithm
29
How does Return work?
4
How do I encode this replacement rule?
5
OwnValues for Set and SetDelayed
2
Apply replacement rules to all levels
15
Is there a difference between Replace with parameter “All” and ReplaceAll
3
Replace Condition in Replacement Rules