Defining a function of a distribution

I have a discrete- time and space markov process that I want to evolve given an initial distribution.

To that, I defined

where the initial distribution would be something like this:

and ... are probabilities to jump from a state to another state.

Now, with the above definition of TimeP, I can correctly evolve the probabilities. However, when I define another initial distribution, say

The function TimeP gets confused because it only stores the name initial, and not its definition (i.e. even if initial has now a different definition, TimeP returns the computed value from initial's definition of firstState, and not firstState1.

So, my question is: is a way of telling TimeP that its argument's name doesn't matter, only the actual definition that matters? Or, do you know a better way of implementing this?

This is what I would expect: the function initial is defining a distribution, and the distribution's definition is on its probabilities. When I change initial's definition to another values, TimeP would give another result.

(I'm not using Mathematica's DiscreteMarkovProcess because the transition matrix is almost diagonal with most entries equal to 0, and the number of states is large).

It is not a direct answer to your question, but it can helps you.

I think it is more efficient to work with sparse arrays and store the resulting distribution in an array, not in DownValues. 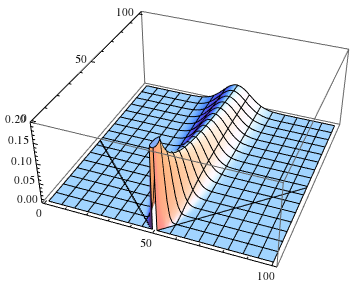 Approach with the memoization: 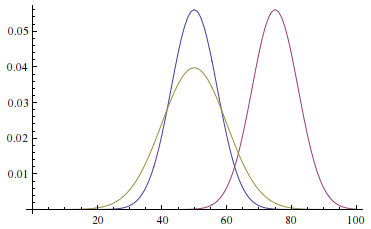 Not the answer you're looking for? Browse other questions tagged functions distributions pure-function markov-chains or ask your own question.

2
Arranging "ranked" nodes of a graph symmetrically
3
Expectation of a composite Markov-Gamma distribution
4
Time inhomogeneous Markov Chain in Mathematica
4
Use (network) graph as vertex
1
Fitting tail of distribution to Generalized Pareto Distribution
1
How to convert a weighted, directed graph into a discrete Markov transition matrix
4
Compute the stationary distribution of a large transition matrix