Locator to show coordinates of plot

I would like to make the locator follow a plot, giving the coordinates as it moves. I don't really know where to start with this one, but I would like the dynamic plot to look something like this:

the code for which is as follows:

by the following code:

basically, so it behaves in a similar way to Google graphs:

where the coordinates appear to the top right of the plot.

@Timothy Wofford The solution you gave works great for functions like Sqrt[x], but runs into difficulties when complex values are encountered. For example:

generated by the code:

shows as a red screen when the locator moves off screen into the imaginary values, generating an error screen as follows:

Is there any way of preventing this from happening? - ie, from stopping the locator moving past {1,0}?

Using another variable and Clip is easier than dealing with the second argument to Dynamic. Below I clipped the x coordinate of p to the plot domain, which won't let the red dot go beyond the ends of the curve. If you just want to stop it at 1, change the upper limit in Clip to Infinity. The clipped x coordinate is stored in x0 and inserted into the plot.

One can use Dynamic, but you need to start the Manipulate body with your own LocatorPane. Something like

The basic functionality is given by this.

For the Sqrt function, we assume x>0, but the user could drag the locator into the x<0 region. I'm not sure how to prevent that, but we can handle it.

Here, I check to see if the function returns a nonzero imaginary part, which used to cause the Plot to return an error. Now, we just move the locator back into the domain of the function.

Note that a LocatorPane[] is sufficient here. No Manipulate[] is required: 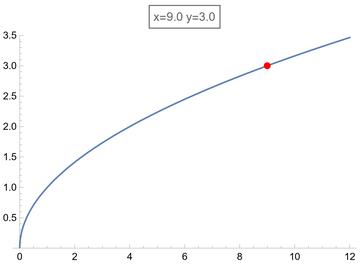 As in the examples up-thread, we render the position of the point using PlotLabel. You could also use Tooltip[] or StatusArea[] (though those will only render if the mouse is near the locator). You could even use a dedicated graphics primitive for rendering the info in the list that is passed to Epilog.

We use Dynamic[] for both the PlotLabel and Epilog options, so they update properly as the location position changes.

We Clip[] the x-coordinate of the locator position, use that to compute the y-coordinate (from Sqrt[], what is shown in the Plot[]), and use that pair of coordinates for our Point[]. The Clip[] ensures that we can always safely compute the point position, no matter where the locator happens to be. The examples in the documentation use the second parameter of Dynamic[] to perform similar manipulation, but that's not necessary here.

Now you can just drag your mouse horizontally and the point will move accordingly, along the plot line. I find it awkward to have to hold the left mouse button down while doing this (I'm on a oldish laptop), so I used an EventHandler[] to turn AutoAction for the locator on and off by a simple click.

Not the answer you're looking for? Browse other questions tagged plotting dynamic locator or ask your own question.

11
Why can't I use Sequence to perform a Select like task?
8
How to dynamically update Locator[] constraints?
2
Control multiple locators along a plot