I'm trying to determine the limit of the sequence of functions

This gives the answer 0.

If I instead enter

Why does the normal Limit give the answer assuming that x<0? Is this a bug, or have I missed something?

Functions that take Assumptions are allowed to make assumptions when necessary. But they are also supposed to tell you when they do that. This is controlled by the GenerateConditions option. Limit in version 11.1 doesn't have this option. It's old, and I don't know that we have a defined behavior. But we're giving Limit a facelift in 11.2, including adding the option. When, unless you disable GenerateConditions, it should report the non-generic assumption x < 0. There will also be a dedicated function for taking limits of sequences instead of functions. 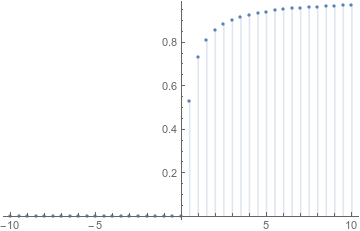 Based on this discontinuity, I would not be surprised if Limit cannot handle it. Besides, when I evaluate Limit[f[x, n], n -> Infinity], I don't get a result. In conclusion, since you have two different regimes, you should specify which regime you are in.

These answer can be visually justified based on the following plots: 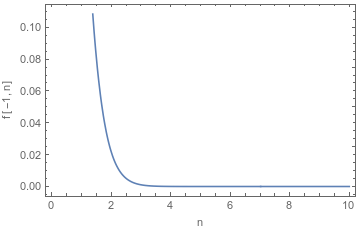 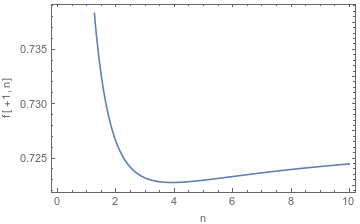 So it is clear to make a division of the domain for convergences. Since the f[x,0] is the upper limit for all functions f==0 is the lower bound. The range between {0,1} suggests immediately that the series is converging equally to zero countered by potency.

I can not reproduce the question's main topic. 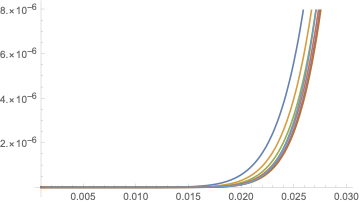 The convergence of the function series is equally on the domain of all reals.

This is useful to prove that

This is a valid graphical solution complete. The input and the Plot show everything that is necessary for mathematical terms for the solution: the behavior of the function, the common point is zero, strict monotony for positive real x and strictly falling with growing natural integer n and it shows to the bordering function exp(-pi/x) towards which the functions series convergences for n to infinity. It does not show the limit for large x or x=infinity, but that in the text of the answer. Everything is done.

There is are nice info from functions.wolfram.com and even better from Mathworld InverseTangent.

For example ArcTan[z]==-ArcTan[-z] for all complex z.

In formula 18 it offers an important identity:

These generalize the question much further.

I stated I am not able to reproduce the question with my version of Mathematica. And supported the answer to the question that Mathematica gave me. I looked up some identities to make the answer of my Mathematica understandable instead of leaving it hidden behind Wolfram language input. I think that enhances understanding in a Wolfram Alpha fashion but using Mathworld.

x first, n first. Evaluations have to be interchangeable for convergence otherwise problems arise like suspected by this question which is not. Singular points are one source that changes behavior.

The question does not do the interchange that has to be central to prove reasons. So it stays behind. My concept of an answer does this needed switch of evaluation order. It lifts the level of the question up in order to reason about what happened inside the Limit-built-in. That is plain scientific attitude.

No. x is not fixed or unknown. x is the very same as n a variable. For each x the relation that fn[x,n] converges towards Exp[-1/(pi x)] for positive x has to be shown.

The methodology may start with x=0 and is trivial for each n and independent of n.

Then we have special cases where ArcTan.

Then make use of the properties of ArcTan:

Then make use of the properties of each fn[x,n]

(i) continuous, (ii) steadily increasing, (iii) zero for x and all n, (iv) limited to all reals by zero, (v) limited for all reals be one.

There is a possible more exact lower bound for positive reals that can be seen in graphic representations.

The use the last relation of the identities (22): 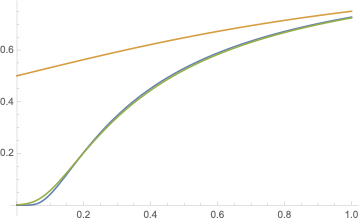 We have a new representation for our fn[x,n] without the constant 0.5 but still with the inverse potential of Pi.

Now there is the dependence on 1/x.

From the graphs of the fn[x,n] we see that there exists an integer for which all differences of fn+1-fn are closer together than a selected positive real espilon.

But what is out better limiting lower bound function like?

It can not be another transcendental function not even an inverse one.

We try Exp[-a/x] and fit the parameter a to the graphs and find comfortably a=1/Pi.

for all real x.

That is True but not what we already calculated.

Without the conditional expression. Both calculated in the same Mathematica.

Might be that a representation for Exp[-1/(pi x)] as a limit of another function series does some more intimedation for the solution.

Not the answer you're looking for? Browse other questions tagged calculus-and-analysis assumptions or ask your own question.

3
How to evaluate this indefinite integral $\csc(4x)\sin(x)$
26
An apparently "simple" limit?
6
Integrate wrong for absolute value of trig function
7
Limit of a real function
3
Evaluate Limit only if both directions(sides) are equal? E.g. $\lim\limits_{x\to 0}\left(\frac{1}{x}\right)=\text{DNE}$
5
Integral depends on choice of symbols
8
Limit problem no longer works in Mathematica 11.1.0
3
Speeding my code and correctly calculating a density which uses Følner Sequences?
0
Analytical expression for a limit