Using a function name instead of its definition in AxesLabel

I seek to use a token as an axis label, but this token, having other meanings, is expanded by Mathematica. If I enclose the token in quotes, it is not expanded, but it is also no longer italicized. Using LabelStyle->{Italics} results in italicization of all fonts in the figure (axis labels and axis tick labels). How do I circumvent token expansion (or equivalently, in effect, italicize only the axis labels and not the axis tick labels)?

(2) I may wish to label an axis with E, but it is changed by Mathematica to e (the irrational constant). Again, I can use "E", but this has the undesired effect of altering the font face.

plotting labeling
Share
Improve this question
edited May 12 '16 at 10:31

What you are looking for can be achieved by wrapping the labels in HoldForm, or if you prefer, HoldForm@InputForm. For example, here is a plot that combines both labeling issues you mentioned:

The two issues you mention are indeed separate:

As you noticed, using strings in labels (though sometimes perfectly fine) has undesirable effects on the font and requires more "finger-painting" with styles. The HoldForm approach is easier to use and the code is easier to read when labels get complicated.

To expand on this topic: 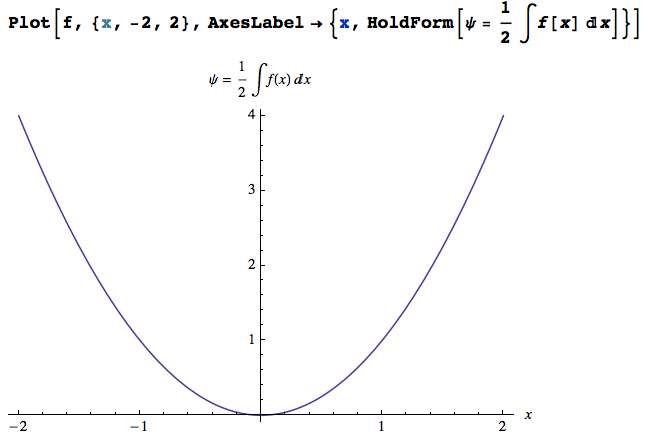 Edit: how to get formatting into labels in general

For output like the above, the essential ingredient is that the expression should be wrapped in a FormBox. Strings aren't made for two-dimensional display, but Mathematica has a way of sneaking FormBoxes into strings: see the documentation.

Therefore, you can get a two-dimensional formula into a plot label either using HoldForm or a string. Using HoldForm, I got the formatting in the image by doing the following:

Now in some cases you want to label a graph with a two-dimensional formula that doesn't obey Mathematica syntax, and in that case you would replace step 4. above by this:

Instead of HoldForm, I now left an empty string "" in the label. Now proceed as above with step 4, for example using an equation like

entered in a math inset (in a text cell as in step 1). If you tried this with HoldForm, it would give a syntax error because the \[PartialD] is being used in a mathematically acceptable but syntactically incorrect way.

The way I described copying and pasting of TraditionalForm into strings was based on my habits, but it's actually not the fastest. I should adjust my habits to the following: In the code for your plot, type a single string placeholder letter for your label, such as "y". Using the mouse, highlight the y in your string and go to the menu item Cell > Convert To > TraditionalForm (or use the keyboard shortcut). This creates the all-important FormBox. Since this box is invisible, you now have to use the arrow keys or mouse to get inside this FormBox, right next to to the placeholder y. From here, you can start typing any arbitrary formula which will then be typeset as TraditionalForm in the plot label.

So in conclusion, HoldForm is a very direct way of getting valid Mathematica expressions into labels without expanding them, and strings should be used in combination with the FormBox wrapper method above to typeset arbitrarily complicated labels.

You can use strings for the labels and Style them as you like — change colour/font/fontsize, etc. For example:

This will style only the labels and leave the tick marks intact. 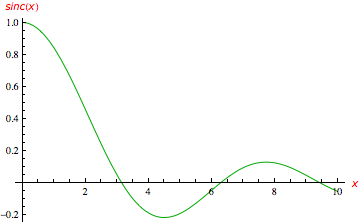 Not the answer you're looking for? Browse other questions tagged plotting labeling or ask your own question.

8
CustomTicks and small ranges
1
Axeslabel doesn't work when using Frame and FrameTicks,
6
Fixing ticks labels position in plot
3
Move framed label alongside y-axis
5
Show seems to forget 'logness' for Ticks of LogLogPlot
19
FrameTicks setting for "tick marks on all sides, but labels only on right and top"
1
General way to make a ListPlot with tick labels restricted to integer values? Likewise for a ListLogPlot with tick labels at simple powers of ten