Structure of Graphics (esp. those produced by Plot, ListPlot, etc.)

I'm looking for a description of the structure of Graphics objects, aimed at the advanced Mathematica programmer.

Unfortunately, I cannot distill my overall state of confusion into one or two concrete questions. I have a ton of questions, but from my ignorant vantage point, I cannot rank these questions in order of importance. Here's an example out of many I could give: "why do the lists of "primitives" in so many of the Graphics objects that I produce with plotting commands begin and end with empty lists?" For all I know, the answer to this question could just as easily be hugely illuminating, or be utterly banal, or, worse yet, may give rise to further questions.

I've read the documentation for Graphics and the tutorial The Structure of Graphics (which, despite the promising-sounding title, did not shed as much light as I'd hoped). (I've also watched the Graphics Language Quick Start, which is generally instructive, but, as its name suggests, far more high-level and beginner-oriented than what I'm looking for.)

A Graphics object essentially describes a state-machine. Each object allowed in the primitive list has one of three actions associated with it

Note, this can be modeled by a stack based system quite easily. According to the documentation, the first two make up the primitives and the last one is done by encapsulating primitives in a List. Truthfully, I think the language used by the documentation is a little rough here, so I would like to make the distinction between directives which add to the state and primitives which are displayed. In light of the above model, let us examine a simple Graphics object 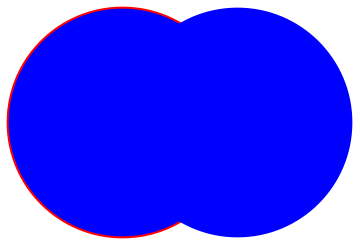 which can be interpreted in terms of the following steps:

should result in a blue disk because Red has been isolated by being wrapped in a List. This also explains why

also generates a blue disk. An empty list has no effect, and just hinders readability.

produces a red disk because Red changed the color register, but

produces a blue disk with a red edge because EdgeForm does not effect the color register.

There are four additional primitives that need to be discussed: Directive, GraphicsGroup, GraphicsComplex, and Inset. For all purposes that I'm aware of,

as far as Graphics is concerned. Its primary use is to group directives together where otherwise you can only supply one, such as in BaseStyle. The last three are container types like List in that they save and restore state upon entry and exit.

Not the answer you're looking for? Browse other questions tagged plotting graphics documentation or ask your own question.

0
Setting graphics options back to default
40
How to examine the structure of Graphics objects
29
Where can I get detailed information on how the Plot command works?
9
Problems with PlotStyle in mathematica 10
5
Changing from Dashed to Solid
2
Extracting RGB color code from a plot
0
Extracting graphics primitives from a Graphics expression with ReplaceAll

32
Plot Option Precedence while combining Plots with Show[]
6
How to add graphics options to an already produced plot having manipulator?
40
How to examine the structure of Graphics objects
2
Render dynamic Graphics objects static
0
How can I modify text in a Graphics produced by Plot?
2
Seeing coordinates in Graphics3D
1
Preventing "-Graphics-" Output from ListPlot[] Command