Inspired by Quality of random numbers I would like to set up a true random data generator in Mathematica.

My idea is to use the static from an open microphone. I recall reading about extracting the "most random" data from such a source but I do not remember the specifics. Presumably all recognizable patterns and frequencies would need to be filtered out, and the remaining data "balanced" (for lack of a better term) to get a uniform distribution.

Edit: this answer is now structured in two sections. The first deals about creating a candidate RNG from audio data. The second demonstrates some testing I performed on this RNG.

Okay, I'll got at it another way then. I recorded 10 seconds of ambient noise on my MacBook Pro internal speakers. I was possibly in the worst conditions for this: my quiet flat, at night. The generated wav file was then imported into Mathematica. At least for my own combination of hardware, this doesn't look too good:

The data array has two components of length 520192 (it's 48 kHz audio, so it's indeed raw data). But, they take only a handful of possible values: 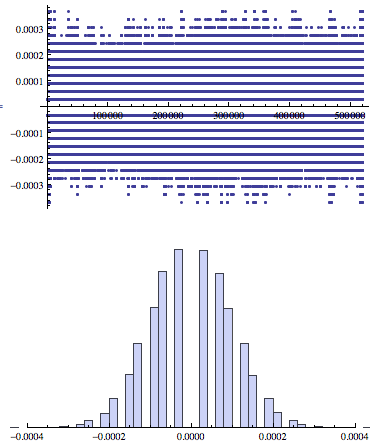 That being said, maybe some randomness can be extracted if the signal oscillate between these values in some random manner. If that's the case, I expect each value will only bring very little entropy to the result, but collectively you can still get something out. And indeed, the Fourier transform is: 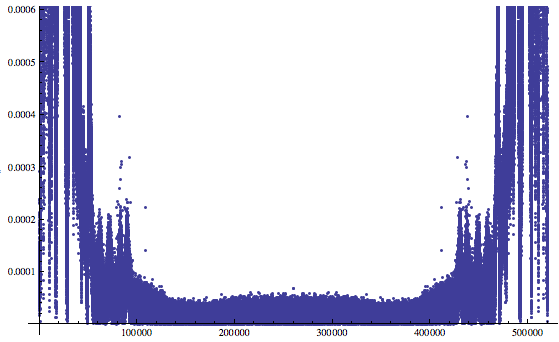 which shows some promising behaviour. We take the mantissa, which is still very far from being uniformly distributed: 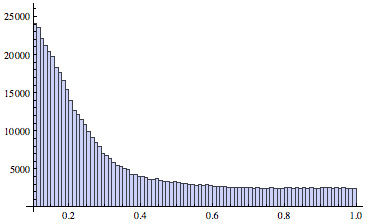 and we can further refine by keeping only least-significant bits: 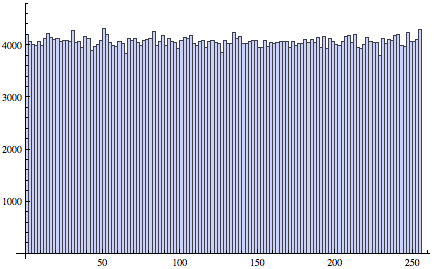 Each integer in this list is between 0 and 255 (inclusive), so it's a 8-bit integer. They look nicely equidistributed, which of course is the lowest possible criterion for any kind of random generator. They should be further tested for randomness.

Alternatively, we can make it into a RNG that creates floating-point numbers between 0 and 1. The following is my “final state” code:

I'm not an expert, so I performed so basic randomness tests following the guidelines in John D. Cook’s “Testing a Random Number Generator” chapter in Beautiful Testing. It's not DIEHARD, or DIEHARDER, but it's a start!

The approach I followed is to compare the properties of our RNG to those of streams of Mathematica’s default RNG (with the same size). I thus generate 100 vectors of reference random numbers:

Then, the Kolmogorov-Smirnov test:

The null hypothesis that the data is distributed according to the UniformDistribution[{0,1}] is not rejected at the 5. percent level based on the Kolmogorov-Smirnov test.

Here I'd be tempted to say: victory!

Obviously, if you've read until here, either you like what I write (and I'd appreciate an upvote) or you are an expert, in which case I welcome comments on my empirical investigation. Thanks!

Here is my quick and dirty attempt based on: Cryptographic Key From Webcam Image. I've used an example image as I don't have a webcam on my desktop but you could simply use CurrentImage to grab the webcam image live if you have one.

Update using a webcam image from my laptop

I skipped the part where they use a circular route to generate the binary sequences and simply read it left to right, top to bottom (with Flatten) because it was so much easier, I have no idea the implication of this on the randomness quality.

Doesn't look all to random any more... 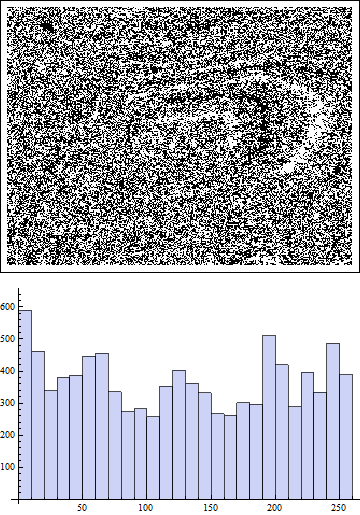 This is very far from my area of expertise and I'm not really sure how to apply better tests of randomness but I figured this is a start.

I also ran the code @F'x demonstated as a simple test:

Here is another possibility based on mouse movements, updated with live histogram, further updated by hashing a combination of the mouse position and AbsoluteTime: 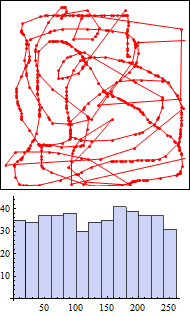 Thanks to @F'x for some of his code.

Now, given my low Mathematica expertise, I expect there are ways to improve both style and efficiency of the above, but the idea is there :)

Not the answer you're looking for? Browse other questions tagged random sound or ask your own question.

55
Quality of random numbers
11
How to extract sample values from an imported WAV file?