How can I numerically solve for fractional functions and fractional derivatives?

What I'd like to do, in an ideal situation, is to evaluate the function at different points and then plot it.

How do I numerically solve such equations in Mathematica? Is it possible to get a Taylor series?

Side question: Does Mathematica treat operators as separate entities?

Start with some good guess for what the solution operator might look like, apply that to itself and feed that into NonLinearModelFit:

A way to obtain an approximate fractional iterate of a function is to use its Carleman matrix, which is formed from its Taylor coefficients, and then taking the appropriate $p$-th power of the matrix to obtain the series coefficients.

Note that I never said that $p$ had to be an integer; in the example given in the OP, then, we can take the square root of the Carleman matrix to get the coefficients of the semiiterate.

Using the routine CarlemanMatrix[] from this answer, we can do this:

To check that we now have the Taylor coefficients of the semiiterate, we can use ComposeSeries[]:

where we have exploited the fact that shalf[x] consists only of odd powers.

One can then also consider constructing a Padé approximant from the series, like so:

(again exploiting the oddness of the function)

Unfortunately, both the Taylor and Padé approximants have a rather limited range of validity: 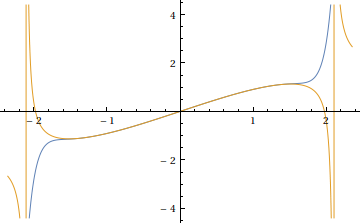 There may be a way to construct better approximants from the Taylor coefficients of the semiiterate, but I haven't investigated them yet.

We can use the general formula of the $\alpha$-th derivative of $x^k$,

and substitute this into the Maclaurin series for the sine. This yields

In the case $\alpha=\frac12$, we obtain a particularly nice form:

Plot the sine and its semiderivative: 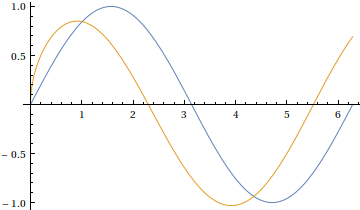 Not the answer you're looking for? Browse other questions tagged calculus-and-analysis numerics or ask your own question.

11
Series expansion of an inverse
10
How can I find a functional square root in Mathematica?

65
Multivariable Taylor expansion does not work as expected
4
Derivatives of functions with arbitrary number of variables?
5
Derivatives of piecewise functions of functions
4
Can I use operators of the form $\frac{d^2}{dx^2}+i\frac{d}{dx}$ inside NDEigensystem?
1
Does Mathematica understand the concept of infinitesimal increment?
5
Tips for Complicated Indefinite Integrals
2
Evaluate numerically derivatives of hypergeometric functions