For a fun example image, perhaps the automatically generated inkblot 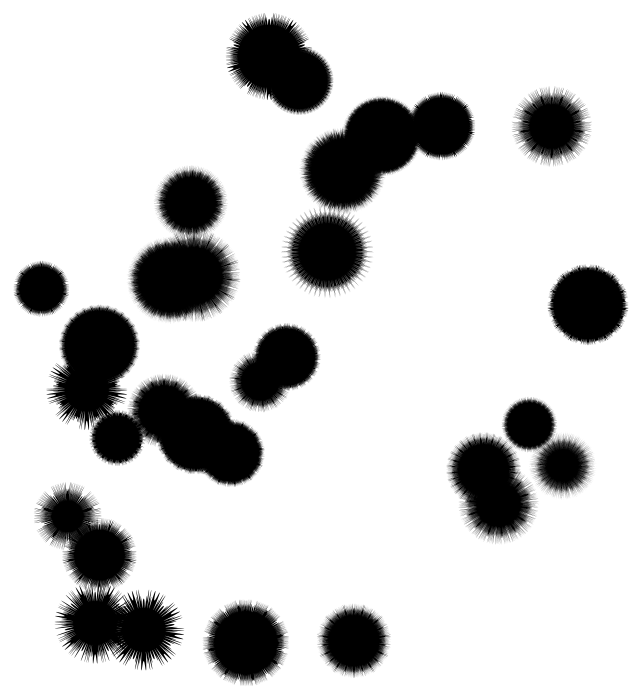 from J.M.'s answer to How to make an inkblot?, calling black pixels obstacles in this case?

I don't have any fantastic ideas for how to do this, and as such my efforts thus far consist mostly of placing a random polytope on the surface of the image, and making sure that no points come within a distance 'd' of the polytope's edges. We first import and process the image as follows:

We can then define a polygon, poli, and use the distance function from this Wolfram demonstration http://demonstrations.wolfram.com/DistanceOfAPointToAPolygon/ to check that the distance from the center of every dark pixel to the polygon is at least some threshold amount.

An example of its usage would be the following:

This approach is inelegant, to say the least, and I'm having a difficult time coming up with a good procedure to randomly generate polygons with perimeter/area constraints, or to determine the most efficient way to sweep the polygon across the image.

Browse other questions tagged computational-geometry geometry or ask your own question.

16
Finding the perimeter, area and number of sides of a Voronoi cell
3
Finding the area bounded by a logspiral curve and two straight lines
1
Maximizing the Area of a triangle with given coordinates (and more)
5
How to draw a certain region and calculate its area and perimeter?
11
Maximize area of intersecting triangle and square with constraints