Exporting the derivatives from NDsolve

The first three exports rightly retrieve the data. But the last three seem to retrieve the function itself and not the derivatives.

Is there a way out ?

First, after running your code, I ran 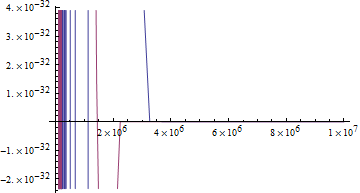 They are clearly different functions. Your problem is not at the point where soln2dec was computed.

The output was was a flat line at zero. This tests shows that computing h1'[t] from the interpolated h1[t] is equivalent to use the 4-th rule in soln2dec. In fact, I would modify the third parameter you passed to NDSolve from

Third, I ran a comparison tool on the seemingly same files and I got

The first few lines are almost identical, but they are definitely different functions.

Not the answer you're looking for? Browse other questions tagged export data-format or ask your own question.