I no longer believe it is a good idea to work with a list of dangerous functions. I have tried to edit the question is such a way that it respects my earlier perspective, but also so that it does not give users the impression that certain things are safe whereas they are not.

Running Mathematica code from an untrusted source is very dangerous. Luckily, Mathematica warns you about dynamic content, so that it is probably safe to open any notebook, as long as you don't run it.

I feel it would be very nice to have a list of functions that can harm a system. Using this, we may be able to make a function that checks if a notebook is safe.

A function to find dangerous functions

A naive function to see if dangerous expressions are present in a NotebookObject, could be the following.

Where listOfDangerousFunctions is given. Unfortunately, this code does not guarantee safety, even we know the full list of dangerous functions.

Furthermore, getting the NotebookObject is a bit tricky. We could simply open the notebook and use Notebooks, but opening the notebook doesn't sound too safe. Also making an automated approach based on this is inelegant. Note however, that using the obvious alternative, which is to use Import (with one argument) on the notebook file turns out not to be safe.

The question is: Which built-in functions are dangerous (especially just by themselves)?

Honestly, Mathematica is so flexible and has so many undocumented functions tucked away in nooks that I think it would be better to create a white-list of safe functions than to try to list all potentially dangerous ones.

Better still would be to simply run Mathematica on a virtual machine or in an instance of Sandboxie where no damage is permanent (excepting privacy issues if network access is not blocked).

The dangerous symbols are contained in MiscExpressions.tr 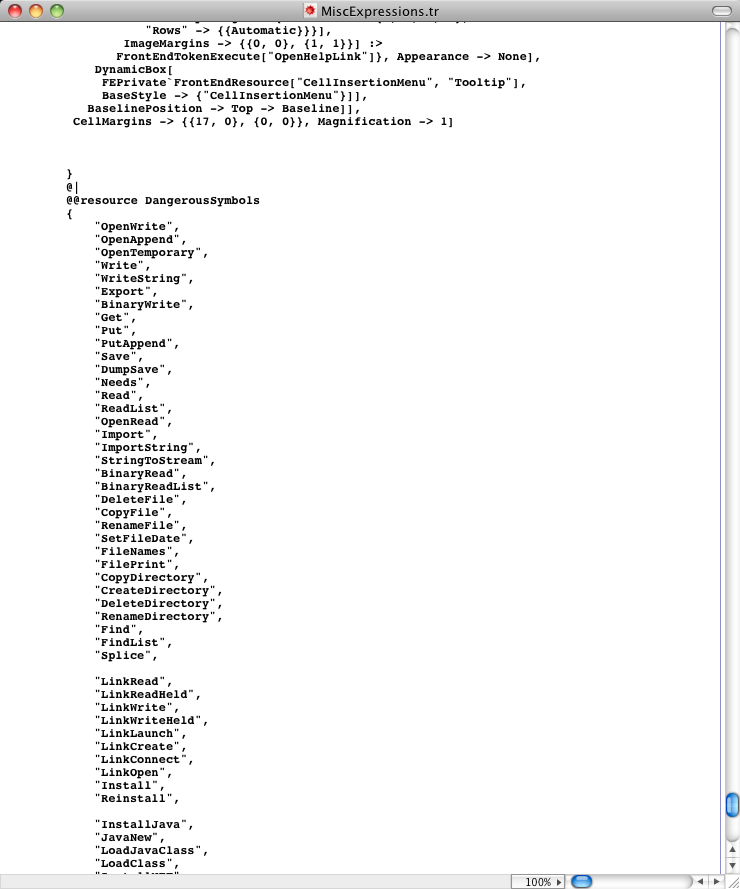 I think a good way to find dangerous functions is the documentation entry about notebook security. Especially the table below is a nice place to start

OpenAppend/OpenWrite + any write function LoadJavaClass + any function to use functions from a java class.

2) Functions that are dangerous if other powerful programs are available

Notes: Export and Put can overwrite files. RenameFile cannot overwrite files, but it can move a file and then replace it with another, which seems very dangerous to me. Possibly SetOptions should be included. Another candidate is SetSystemOptions. Mathematica evaluates the result of Import, which makes Import dangerous. Possibly Install always has access to powerful code and is dangerous in any context. Read and ReadList can be used to execute commands, as can OpenRead. Missing here are: NetLink functions. SendMail can send files as attachments.

Functions that convert strings to code

Notes: Symbol can be used to generate the symbols/functions we want to ban.

If enough functions get listed, I will assemble them into lists of useful combinations so that you do not have to copy and paste and then join these yourselves.

Feel free to add functions to this answer, I am sure the lists are not complete yet.

0
How to avoid malicious code when opening & executing notebooks
589
Where can I find examples of good Mathematica programming practice?
37
How can I evaluate untrusted Mathematica code in a sandbox?
26
Calling external commands without showing command prompt on windows
18
In a CDF can I suppress or avoid "This file contains potentially unsafe dynamic content..."
12
What does the message 'This file contains potentially unsafe ...' mean and how serious is it?
8
Extract a list of all built-in functions used in a notebook
11
Produce the same color scheme as IboView
8
What are the possible security breaches in CDF content?
3
Safely running Import on an unknown URL
See more linked questions