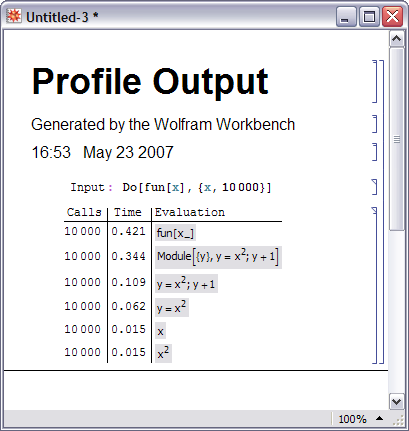 If I want to make my code faster, I check if I can use FunctionCompile to speed it up:

This compiler translates WL code into LLVM byte-code, which can then be compiled to native machine code. There is a very good tutorial video on YouTube which explains what you can do with this compiler:

Effective Use of the Mathematica Compiler and Code Generation

2
Is it possible to profile Wolfram Language code without Workbench?
0
Automatic Cuda/CPU code; Fast programme run
1
Understanding Mathematica: How to write fast code?
590
Where can I find examples of good Mathematica programming practice?
138
Can one identify the design patterns of Mathematica?
37
How to select minimal subsets?
104
Profiling from Mathematica
56
How can I implement dynamic programming for a function with more than one argument?
16
Finite difference method not converging to correct steady state or conserving area?
3
Find the slope between adjacent points in a list
See more linked questions