Parallelization of the stochastic Euler scheme

I wrote a simulation to approximate the law of a stochastic differential equation via a Monte Carlo method using the stochastic Euler scheme. Then I thought, it would be a good idea to speed up things by means of parallelization, but although I think it is an easy example (and similar problems were discussed here lots of times), none of my attempts was successful.

First the code (you can find some explanations below):

MCEuler implements the Monte Carlo Simulation using the standard stochastic Euler scheme. Since the coefficients of the stochastic differential equations doesn't fulfill standard assumptions like Lipschitz-continuity, it is possible, that some "discrete trajectories" explode. Therefore, I added the Quiet and Check commands.

MCEulerMT uses again the Euler scheme, but if some "discrete trajectory" leaves a ball of radius R, we set the value to zero.

The Comparison-method should test both procedures on the same noise.

Then I replaced the Table-Commands in MCEuler, MCEulerMT and the last line of the code (I didn't use it creating the noise, but I think there are no side-effects!?) by "ParallelTable" and the runtime was awful. It was much slower than the code above, and I tried other implementations and commands (e.g. Parallelize) but I didn't make any progress.

Perhaps here are some guys, who could explain me, what's wrong about my idea, and how I could fix it.

The problem you have and what I've shown very often here is, that you can't assume, just that you're using a parallelised version of a function, to gain speed at least double.

The problem with parallelised algorithms is always that you've to package your work-load (the stuff you want to calculate on) on the available processors (cores).

If you start to go parallel you have to start to measure and to find out how to best package your work-load in such sub-units, as that your processors are working on them and don't mutual prevent themselves.

Something that you don't want is that processor A needs to wait on some data, which processor B is actually working on.

It is very often the case, that people expect through the prefix Parallel a parallelisation which will make their algorithms faster and are astonished that it took even longer than before.

You have to keep in mind, that all the definitions are needed to be copied to all the available kernels etc. this is really expensive. So in order to gain something from parallelisation you need to rethink your data layout and how it should be distributed amongst the available kernels.

Every parallel algorithm that I've seen so far does look very different from its serial counterpart. The beautiful thing about Mathematica is that you could leave most of your algorithm parts untouched, but you need to take care about how your data is distributed amongst the kernels.

First thing I've done is running a Profile on your implementation:

It comes at no surprise (reading your code), that the function Euler is called very often. So the first thing that came to my mind was: "if that function is eating up all the processor cycles, why not try to reimplement it to gain some speed?"

The function Euler is rather simple and there is no point to parallelise it, but why don't Compile it? 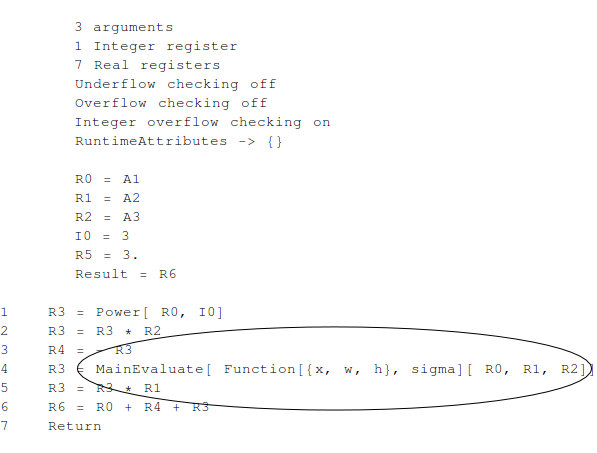 This means, that every time the function cEuler is called it'll call the main evaluator in order got get the value of sigma. If something like that happens, all the compilation does not make sense anymore and it is even slower compared to a non-compiled version.

If you define "InlineExternalDefinitions" the variable sigma will get inlined and no call to the main evaluator is needed anymore.

Although Mathematica has quite different parameter passing semantics when compared to C/C++ it gives me allways a bad feeling if arrays/array indices are passed around. That's why I rewrote the Noise creation functionality.

Actually the Noise creation is the only part of your code that is parallelisable, if you leave the code mostly as it is.

If you execute createNoise and observe the parallel kernel status at the same time, you'll realize that the random number creation is well distributed amongst the kernels, but they aren't really busy.

We should take notice, that we have to weigh the cost of parallelisation with the actual range of the data. It looks that way that a range of StepsMC (1000 in your case) is even not a big enough to really benefit from parallelisation.

But let's see, maybe later we'll increase StepsMC, so it is good to have it and there is no pain in executing it.

Here is nothing to parallelize. Although Fold per se can get parallelised, but it is not if you use complex slot patterns. Again, I doubt that with the current range of StepsMC it worth's the effort to rewrite the algorithms to become parallelised on a large degree.

So now let's execute the code:

This yields the following result:

Comparing that with your original implementation this is a speedup of roughly factor 2:

Not the answer you're looking for? Browse other questions tagged differential-equations performance-tuning parallelization stochastic-calculus or ask your own question.