I don't know if I've just found a bug (and if so, whether there's a workaround), or if I'm just losing my mind. Without further ado, here is my code (really, a minimal working example), run on Mathematica 12.0:

The point of Out[5] is just to drive home the already-obvious point that Out[4] is not going to be correct. Indeed, it's not just 3: if I plug any (specific) value of j in, I get a correct answer that does not agree with G[j]. And why does G[j] have r's in the denominator anyway?!

I keep wondering if I'm just missing something obvious, which sometimes happen when I stare at code for a very long time.

Any help will be greatly appreciated.

To avoid unintended variable capture, one can use

Concerning r in the denominator, consider the much simpler case of a geometric sum:

Of course it is a polynomial for every fixed positive integer j.

I decided to move my comment from @user293787 to an answer as it made the comments a bit cluttered and made it unlikely that someone else encountering this issue would read it. I emphasize however that the answer that follows relies on user293787's explanation that there was conflict between the two k variables.

A simpler case where that happens :

[Edit: added the solution below that localizes the iterator in a convenient way.

More general solution : we can automatically localize all the iterators by defining a new sum and restricting the name choice for the iterators to belong to a set of one or more names.

Defining a sum that localizes the iterator k :

One could probably include more iterators in "local" using local={k1->unique[k1],k2-> unique[k2],...}. Then instead of using Sum the user may define F and G using the new sum function :

We can check that the iterators are correct by evaluating G on a symbolic argument:

Finally we may check that the problem has been solved using sum:

TL;DR Origin of the problem: symbolic handling of F[k] in G[j] where k appears in the argument of F and also in the iterator of the sum in the definition of F.

The solution above that consists of replacing := with = evades the double presence of k by simply evaluating the sum so that k no longer appears (see discussion below if difference between := and = is not clear (nothing fancy)).

The symbolic handling occurs when the upper bound for the iterator in G (the last element of the second argument in Sum) is symbolic but not when it is an integer. This leads to a difference between G[3] and G[j]/.j->3. The solution

The problem is tricky and interesting and it could be quite difficult to debug in a long code. 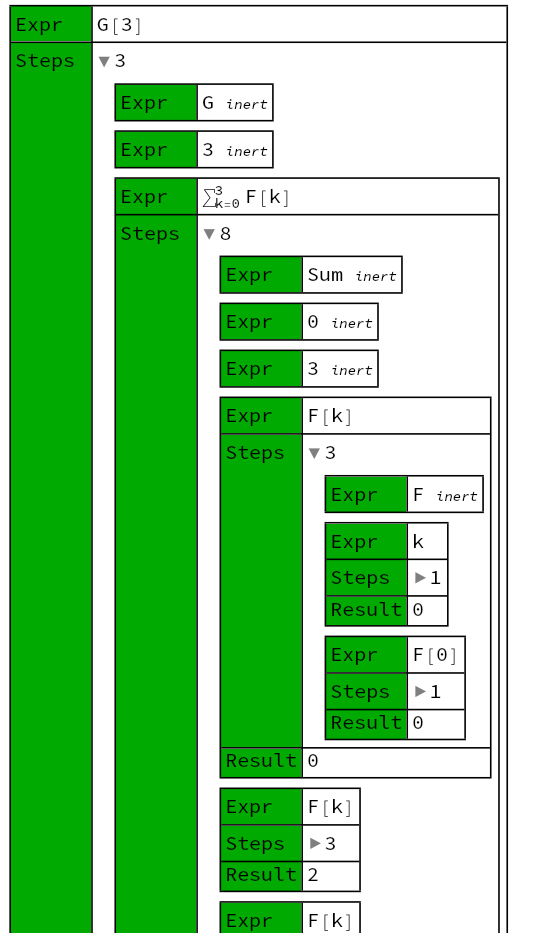 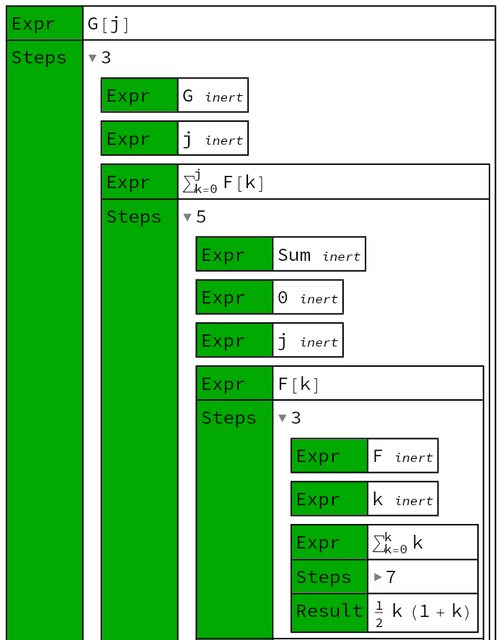 From traceview2[G[3]] (output shown in first picture), one sees that the evaluation process is as expected:

Consider now G[j] with a symbolic j. Mathematica does not know the upper bound in this case so it can not do:

Instead, as can be checked using traceView2[G[j]] (second image), Mathematica attempts to do pure symbolic manipulations replacing F[k] by the symbolic expression it gets from the definition of F, that is, the output of F[k], but...

The issue there is that maybe Mathematica applies the formula Sum[k,{k,0,n}] then takes n=k at the end where k is a global variable.

Computing F[j], we obtain the expected result j(j+1) and then replacing j by k with /.j->k, we find a result that is different than the result obtained from F[k].

For the following mini-discussion that answers the above question,the important component in the above output is HoldAll.

Sum holds F[k] meaning F[k] is not replaced by its definition right away. Instead at the beginning, basically, Mathematica sees the string of characters "F" "[" "k" "]" without checking what is under the hood (at least conceptually not sure what Mathematica is actually doing). Then using the iterator k in the second argument of Sum, Sum successively makes replacements for k, k->0; F[0], k->1; F[1], k->2; F[2], k->3; F[3] and each F[0],F[1],F[2],F[3] will be replaced by its definition (I do not know if replacement rules are actually being used).

If instead F[j_]=Sum[k,{k,0,j}] (no :=) then there are no surprises because the sum is evaluated before assigning the expression to the function F. Hence, Mathematica sees F[j_]=j(j+1).

So a possible solution for the initial question of OP would be (replaced F[j_]:= with F[j_]=) :

Appendix: Difference between F[j_]= and F[j_]:= and when to use one or the other (nothing fancy in the discussion below).

If I remember well, for a somewhat long time working with Mathematica I thought I always had to define a function with the construct F[j_]:=expression.

However, often it is better to use F[j_]= either to avoid surprises like in the above example or to increase the speed of execution as F[j_]:= means nothing is being evaluated until it is called with an argument. For example, compare (* The second one takes 2 seconds before it outputs something*):

I use f[j_]:= when a symbolic expression can not be obtained or I need a black box numerical function for certain numerical computations in which case I would use f[j_?NumericQ]:=.

250
What are the use cases for different scoping constructs?
88
The clearest way to represent Mathematica's evaluation sequence
31
What are some advanced uses for Block?
10
Treat all variables as local in a module
1
Internal variable in Sum inside a function

28
Module with "local functions"
5
Infinite expression encountered when simplifying ArcTan sums although the result is finite
3
Expanding rational functions with minimal denominator
13
Unexpected optimization with With
2
Use of Module With Functions
5
HoldAll Attributes and Delayed Evaluation: ContourPlot with solutions to NDSolve
0
Combination of Block and With - Unexpected results