where <n> is the $KernelID. So for example, a full print statement would return

where in the code, I have Print[<my print statement>]. However, with the number of kernels I have up and running, these prepended messages take up a lot of screen real estate. Is it possible to turn off these From KernelObject... messages so that I just have the original Print statement printed to screen? I am pretty new to Wolframscript so I haven't been able to determine a potential solution myself. Perhaps printing to an output stream?

A minimal working example would be for example

to be executed in the terminal. In my specific case, all the code is in a Wolfram Language Script file, so I am executing wolframscript -file <myfile>. But the results are identical, the print messages are prepended by the above message.

Ok, I've managed to implement this in the standard front end by using Trace[ParallelEvaluate[Print["Test"]], CellPrint], which shows me the exact pattern to overload in the Downvalues of CellPrint. So I simply set

which is a bit brute force, but it works. However, this doesnt solve my problem. This only works in the FrontEnd, and not when using Wolframscript. Running Trace[ParallelEvaluate[Print["Test"]], Print] in a Terminal using

so it looks like wolframscript is inserting the values I want to print into a list of other strings that get printed along with it. I'm not sure how to proceed from this point.

I've managed to switch off printing of the "From remote kernel:" lines. The basic idea is to redefine Print for them:

Here is how it is executed in the command prompt: 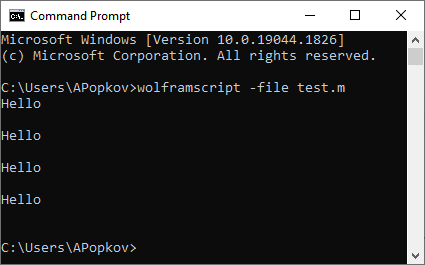 P.S. It seems in your case something other is being printed. Hence you can try the following instead:

4
Customize how many of the same warning messages are printed from parallel kernels?

8
wolframscript — How to print in color
7
How do I reliably read from stdin using wolframscript?
0
Running a wolframscript on the cmd prompt: error message related to "shadowed" definitions