Ask Question
Asked 6 years, 7 months ago
Active 6 years, 7 months ago
Viewed 371 times
2
$\begingroup$
This question is unlikely to help any future visitors; it is only relevant to a small geographic area, a specific moment in time, or an extraordinarily narrow situation that is not generally applicable to the worldwide audience of the internet. For help making this question more broadly applicable, visit the help center.
Closed 6 years ago.

Why can't Mathematica solve this equation as stated?

Is there another way to solve it?

Although you're using an outdated Mathematica version, the problem should be solvable as follows:

Depending on the differential equation, one side of the t interval may be preferable to the other, depending on how sensitive the solution is to variations in the first derivative on each side. Here I'll choose the right-hand boundary to impose the initial conditions: 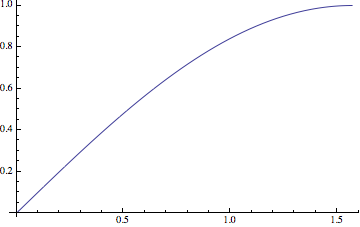 This method works by imposing an arbitrary "final" slope at $t = \pi/2$, and then "chasing" the solution back to the initial time $t = 0$ in the function backwardSolution[finalSlope]. The function boundaryValue returns the resulting initial value of the solution. This value is supposed to match the first boundary condition, z[0] == 0, but initially it will not, because the final slope that we used was wrong. So the FindRoot step looks for the correct value of this finalSlope.

Once it is found, we call it slope, re-do the backwardSolution[slope] for this value and plot the resulting InterpolatingFunction. To impose a different boundary condition at t = 0, you could change the boundaryValue function by subtracting the desired boundary value from it (so that it returns zero when the boundary condition is satisfied).

3
How could I define a function as the solution of equations in Mathematica?