I was trying to understand what happens when I insert Deployed -> True/False in an ExpressionCell but couldn't see a difference in most of the cases shown in the documentation.

I can't see what changes, if I change Deployed -> False to Deployed -> True. The slider can be moved in both cases.

I can't see a difference between the two Graphics objects.

This is the only example where I can see the difference.

front-end notebooks cells
Share
Improve this question
edited May 18 at 14:18

[Note: I assumed CellPrint was necessary, which was wrong. I did not realize that ExpressionCell as output becomes an InterpretationBox. See end.]

For the given code, you can't edit the graphics with Deployed -> True. (Click on the graphics, then double click, then drag the disk around.) You also cannot resize the graphics or use Get Coordinates, the Drawing Tools, or other editing actions in the graphics context menu. I also cannot select any elements in the cell, although the slider responds to mouse-down and mouse-dragged events. 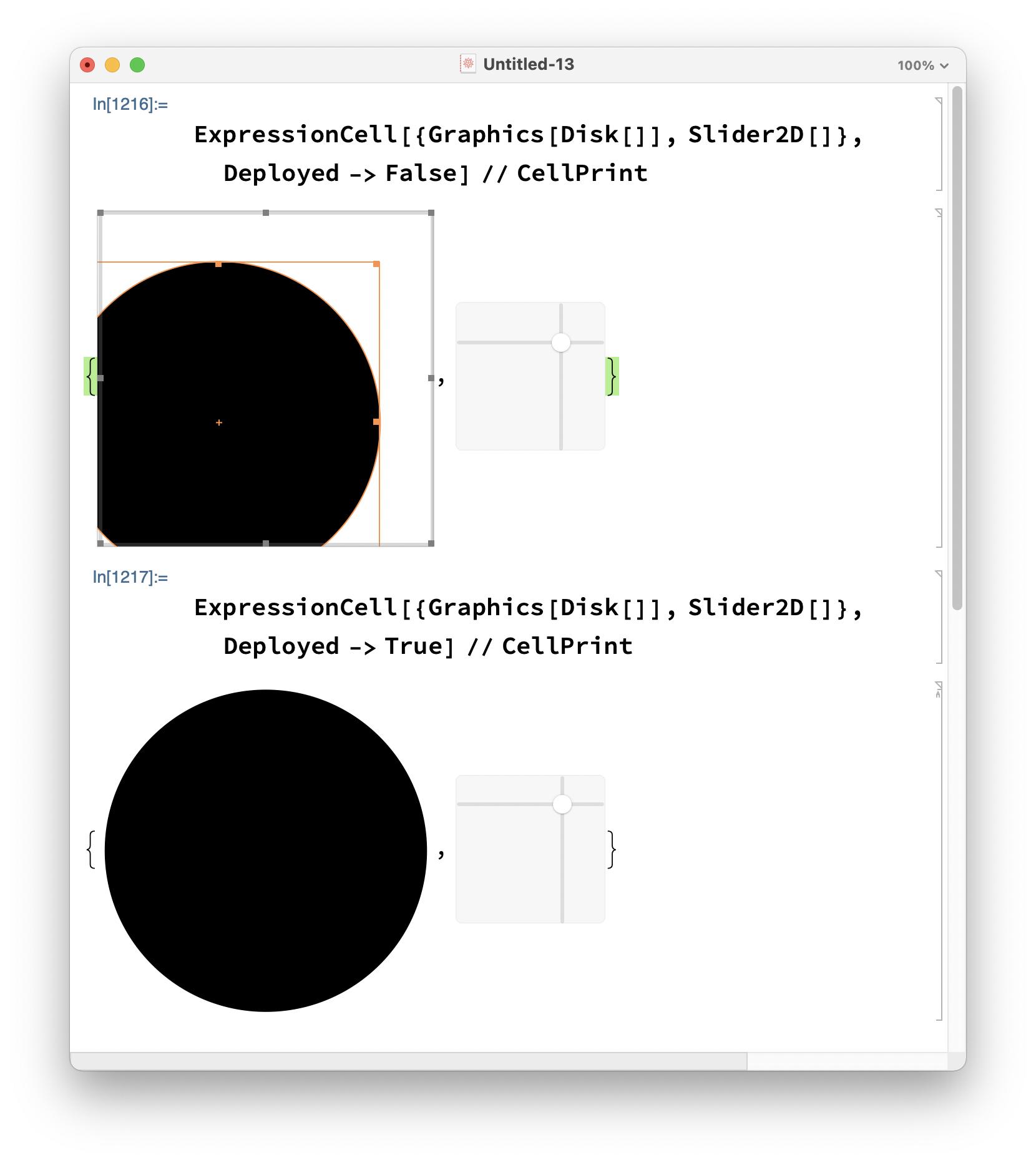 It's a bit more complicated if you use cell styles. The default "Output" style has GraphicsBoxOptions and Graphics3DBoxOptions that override Deployed to set it to False. To counter that, you need to add one or both of the following Cell options:

If you do not do this, then the cell will be deployed but the graphics editable. When the graphics are edited, the cell is converted to an "Input" cell and the Deployed option is removed.

Thus the following gives a deployed cell (but the slider still responds to mouse events):

If we remove the cell option Deployed -> True, we get a regular cell with deployed graphics. However, if the cell is edited, it will be converted to an "Input" cell and un-deployed.

Other cell styles may be investigated as desired. I do not remember this happening several years back (overriding Deployed with box options), but maybe my memory is wrong. I don't have a way to check at this point.

The given example without CellPrint[]

Since the example comes from the docs for Deployed, I would say it's a bad example to show how Deployed works. Since it's the only example, it's doubly bad.

You can play with the following to get something where Deployed has an effect:

I got it to give me the error:

Not the answer you're looking for? Browse other questions tagged front-end notebooks cells or ask your own question.