My question is, what efficient methods are available in Mathematica for finding the function $f(y)$ that minimizes this functional? I will outline two methods that I have found that are problematic, but I would love to know some alternatives!

We can use the variational methods. So I define my function and use NDSolve to solve the Euler-Lagrange equation. One issue I have here is that I don't know apriori what constraints I should use: since this gives me a 2nd order differential equation, I need 2 constraints. I set the derivative at y=0 to be 0, as I expect f(y) to be symmetric about y=0. Since I want the functional to be minimized, I use the fact that $f'(0)=0$ to also come up with the constraint that $f(0) = 1$. (To get this, I simple plugged the first constraint into the functional and solved for $f(0)$ that minimized the functional).

However, the result I am getting is certainly not a minimum of the functional. If one plots the above solution, you see that $f(y)$ blows up as |y| increases, which clearly can not be minimizing the functional because the functional has a term that goes at $f(y)^4$ which should keep $f(y)$ from blowing up. Am I doing something incorrectly here? I believe the issue is that it's trying to find an extrema rather than a Minima, which is what I am specifically looking for. However I don't know how to force it to minimize. If there were some way to simple use NMinimize to get a function, that would be ideal.

The other method I came up with may be the worst(most inefficient) way one could do this. The idea is the discretize y into pieces of size $\epsilon$, and treat each f[y] as an independent variable. One must also discretize the derivative as $f'[y] = (f[y]+f[y+\epsilon])/\epsilon$. Then you can directly minimize the functional as a function of N variables. The issue is that, if I want to know $f(y)$ with any precision, I need to make $\epsilon$ small, which means I have a very large number of variables. Thus, the minimization takes a very long time. Here is example code applying this to the above functional:

This gives closer to the result I am expecting. It's still very slow when I make the number of sites large, but at least it is something.

I would love to hear any suggestions you have on solving this problem! Functionals of this form are very common in physics (due to the usefulness of the Landau-Ginzburg theory) and it would be great to have more efficient ways of minimizing them.

I'd typically go for "discretize and optimize".

Here is a quick and dirty implementation of this strategy that avoids all symbolic computation and that utilizes Sobolev gradient descent with respect to the $H^1$ inner product to speed up the computations. See also Can Mathematica solve Plateau's problem (...)? for a more sophisticated application of $H^1$ gradient descent.

(I have to sort of armwrestle FindMininum to convince it to use the correct gradient. But I cannot change FindMininum's stopping criterion, so I stop it manually.)

In this example, I impose Dirichet boundary conditions. 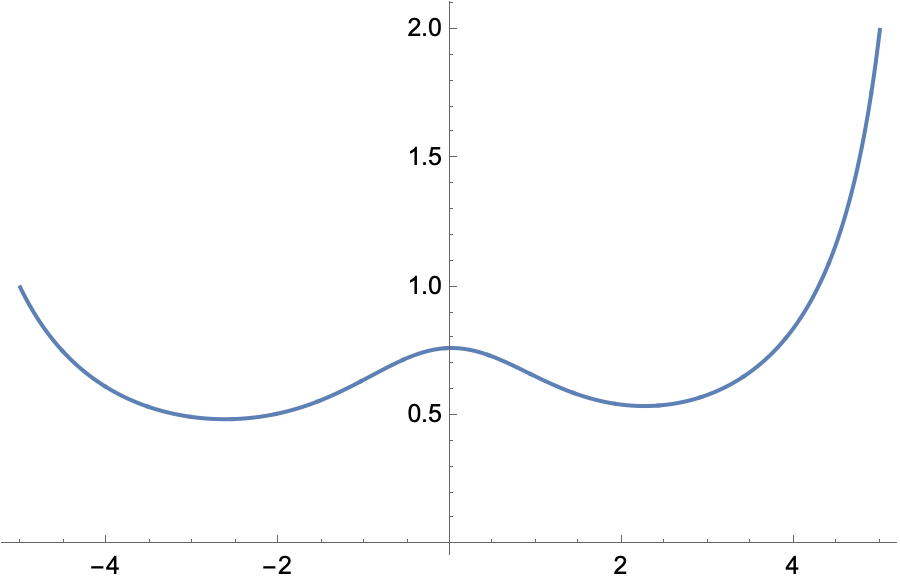 The variational method produces a different solution, if the second boundary condition given in the question, f[0] ==1, is replaced by f[y] vanishing in the limit that y goes to infinity.

The desired solution is obtained by solving eq as a separatrix problem. 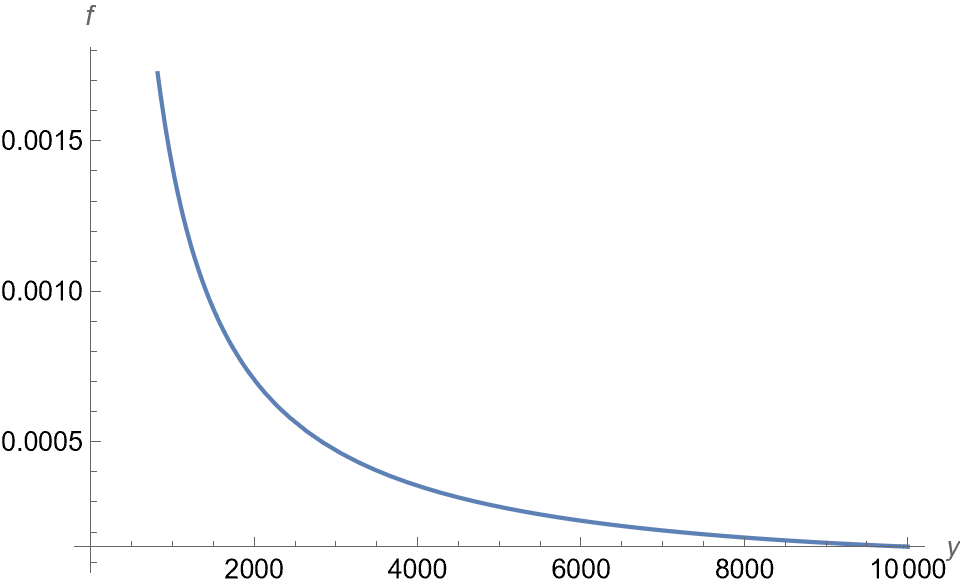 which I obtained by hand from successive guesses for the argument of s. This process can, of course, be automated, as in 147207. Comparing the result with the asymptotic solution show good agreement for large y, 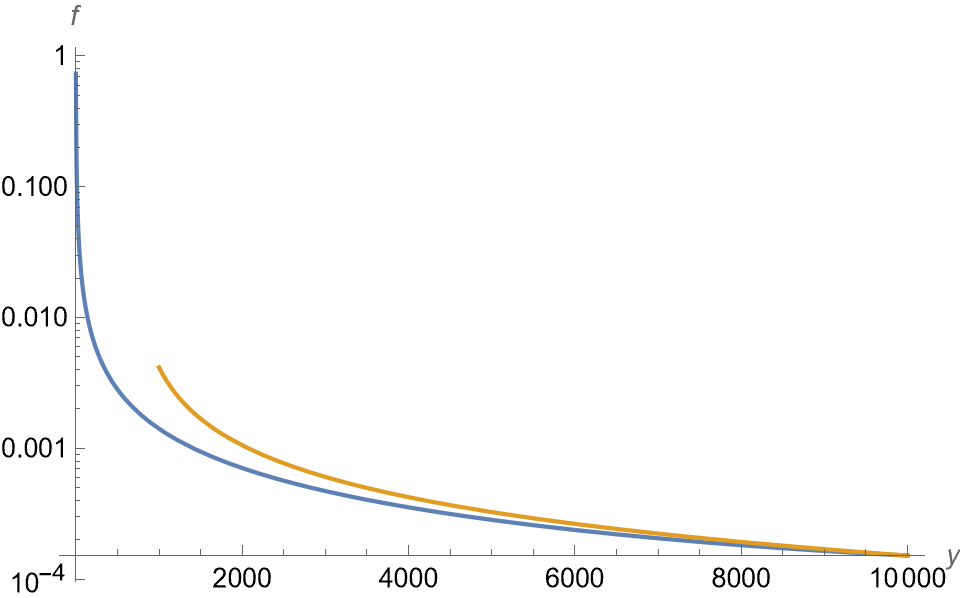 For completeness, here is a plot of the solution for small y. 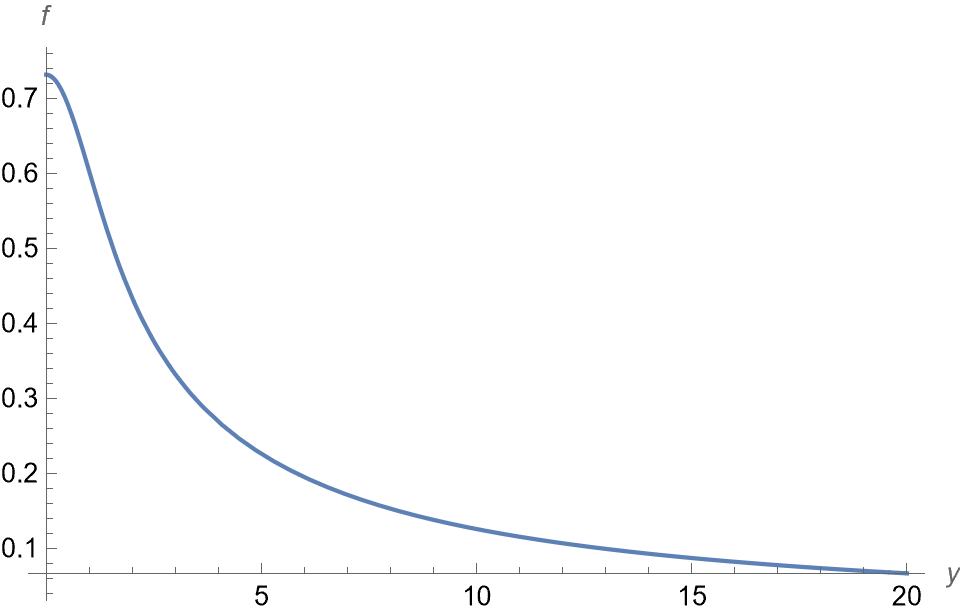 Finally, the corresponding value of the integral of H is

Not the answer you're looking for? Browse other questions tagged differential-equations physics nonlinear boundary-condition-at-infinity variational-calculus or ask your own question.

70
Can Mathematica solve Plateau's problem (finding a minimal surface with specified boundary)?
4
While loop with infinitesimal steps is too time consuming

5
NMinimize Constraints on Interpolating Functions
10
NDEigensystem cannot solve numerically the 3D Coulomb problem, while DSolve returns the right answer
2
how to find a function that minimizes the other function with a known function
0
Finding the minimum points of a discrete trigonometric equation
0
How to find Euler equation of complex function by the textbook definition