Getting rid of the horrible Times x in Mathematica 12.3

Revised question to reflect new issues pertinent to Mma 12.3 and that are unresolved by the linked question - this is NOT a DUPLICATE and should not be reflected as such

... Mathematica has horribly started displaying this as:

Aside from being clumsy, inefficient, absurdly lacking in elegance, and contrary to standard notation convention, I also really don't want the unnecessary confusion of perfectly obvious notation being confused with 2x(1-x).

How can I switch this dreadful auto-notation mess off, and revert to the way things have always been? For both Input and Output please.

Thank you too for the reference to:

However, the latter question is a different question. That question was asked in the context of Mma 11 where this behaviour did not occur in the example given. The errant behaviour is new to Mma 12.3 (at least on a Mac). Even with the posted solution, the problem remains that if one wants the x symbol to appear for FUNCTIONS (as was the norm in Mma 11 and 12.1 and 12.2), but NOT to appear for brackets such as 2(1-x), then how to switch if off for brackets () in 12.3, but still leave it on for FUNCTIONS?

Is it possible to resolve the Times display problem/bug that appeared in Mma 12.3 when using brackets e.g. 2(1-x), WITHOUT switching off the more general display of times in FUNCTIONS? 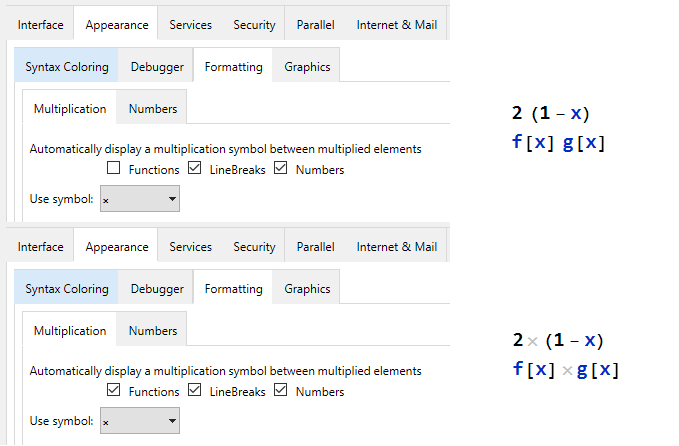 Not the answer you're looking for? Browse other questions tagged formatting notation or ask your own question.

1
Problem with automatic times sign
17
How do I remove the little × that shows up in the frontend when typing?
10
What rules determine displaying implicit '×' between products of functions in Mathematica 12?
4
Remove the Times x from display in Inactivate expressions in V13
3
What does Edit>Preferences>Appearance>Multiplication>Use symbol

17
Preventing Superscript from being interpreted as Power when using Ctrl+^ shortcut?
1
Is there a way to "hold" prefix / infix / postfix notation?
4
How to prepare a Mma expression to insert it into Comsol?
0
Stylesheet code for limitspositioning option of InlineCell inside a "Text" vs "DisplayFormula" cell
17
Is there a way to do this with Mathematica shorthand notation?
5
How do I define my own notation for mixed operators?
0
Notation package: StringMemberQ in conditional notation definition
2
SubsuperscriptBox and SuperStar
4
Remove the Times x from display in Inactivate expressions in V13