I'm looking for general information on how to optimize matrix valued functions, I have the following function I'm looking to maximize (or figure out if this is possible at all).

Input values are of the type:

Could I then use NMaximize or Maximize to optimize this function?

matrix mathematical-optimization
share | improve this question | |
edited May 22 '13 at 2:08

(Edit, I've edited the following almost entirely from the original, but the idea remains the same)

From the comments it seems that a single solution will be enough. You want the input of the original function to be a numerical matrix. You can set up a test for this as follows:

This should give you an answer without any errors.

See if this is what you're after. I took the liberty of simplifying your MaximizeFunction, and in the process it became about twice as fast. I also got rid of the initial capitals. Best to avoid them, and avoid conflicting inadvertently with built-in functions.

In a comment you indicate that it might be sufficient to find the maximum over orthogonal matrices ($WW^* = I$). Then it is easy to do, since RotationMatrix[t] gives half of them. The other half of the orthogonal matrices are given by any reflection times a rotation matrix, such as {{1, 0}, {0, -1}}.RotationMatrix[t]. In all cases I tried, the p-value, as a function of t was the same for reflections as for rotations; further, the period as a function of t was π/2. (Perhaps one should check that.) If so, we can just use rotations.

We'll make up a large, random data set. It turns out there can be several local maxima, so using FindMaximum would probably give unreliable results. Another problem is that it takes a long time to evaluate a single function call. This makes using NMaximize take a very long time.

Plot the function to get a sense of where the maximum is. (Plot from 0 to 2 Pi to check the periodicity.) 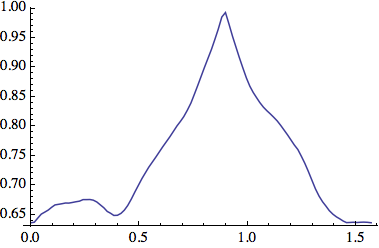 We can get a rough approximation of the maximum from plot:

Use the first coordinate as an initial point for FindMaximum.

Here's a function that does the whole thing:

If maximizing over rotation matrices is not sufficient, then you could do something similar with a different parametrization of the matrices. It tends to get harder as the dimension of the input domain increases.

If you know a formula for the p-value of the IndependenceTest, you might be able to use that to speed things up. (If there is a formula that can be differentiated, then FindMaximum can use Newton's method and so on.)

Not the answer you're looking for? Browse other questions tagged matrix mathematical-optimization or ask your own question.