Compile Can Handle Passing an Empty List Only When Returned by Some Functions?

There seems to be a bug whereby Compile can deal with empty lists only when passed in some cases. Consider the case below.

No error is thrown and all is well.

In this case, the following error is thrown.

The outputs are rightfully the same, but it doesn't seem like the second case should throw an error and be uncompilable. Not only are ConstantArray[{0, 0}, 0] and {} equal; they are identical, as measured by SameQ.

What is going on here?

I have code that requires the use of ConstantArray as above, but I want it to compile and not to throw an error. Are there any suggestions on how to deal with this?

The root cause of the error is that we are attempting to join tensors of incompatible shapes. Namely, a 1x2 array...

... with a zero-length one-dimensional array:

But... if this is the case then why does comp1 not issue the warning message? The reason is that the compiler has optimized the Join expression when one of the arguments is explicitly an empty list: 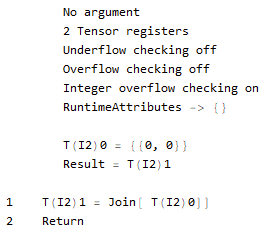 ConstantArray Expressions Not Optimized Out

Now contrast this with the code of comp2: 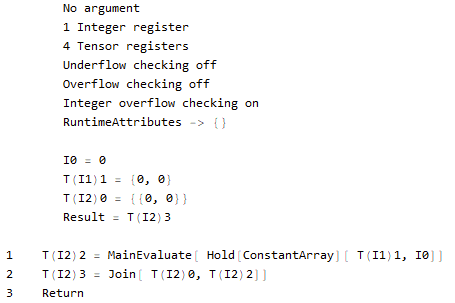 This time instruction 2 shows a two-argument call to Join. The compiler has not been able to recognize that the second argument will result in an empty list. That argument will be passed to the main evaluator to evaluate the ConstantArray expression.

Note that instruction 1 is expecting the result of the ConstantArray expression to be a two-dimensional tensor of integers (T(I2)). So it is surprised when the result turns out to be an empty one-dimensional list. The compiled code bails out and the Join expression is evaluated by the main evaluator (accompanied by a warning message due to the unplanned use of MainEvaluate for Join).

We can reproduce this behaviour by expressing the empty list by a different, fully-compilable expression: 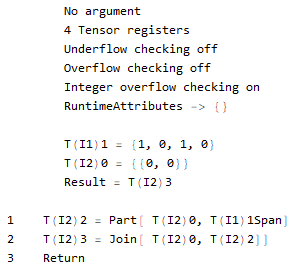 Here again the compiler has not recognized that {{0, 0}}[[;; 0]] will be an empty list that could be optimized out of instruction 2. The Part expression is compiled, so unlike the previous example there is no explicit call to MainEvaluate. But this will also incur the type mismatch and fall back on the main evaluator implicitly for the Join (albeit with a slightly different warning message):

So, assuming that we do not know a priori whether or not this situation is going to occur then we could introduce an explicit guard for the case. For example:

Michael E2 notes in a comment that there does exist at least one compilation path in which the type system will preserve the two-dimensional structure of an empty array. It involves a combination of Most and Table:

This trick of preserving the 2x0 tensor structure only works in compiled code. The main evaluator still collapses Most@Table[{0, 0}, 1] into an empty one-dimensional list.

The compiled code for this variation is a bit more elaborate than the other versions as it involves explicit instructions to construct the temporary Table and drop the last element: 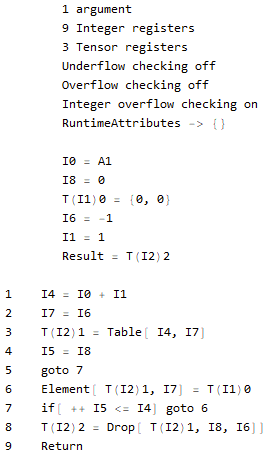 This analysis is current as of Mathematica version 12.2.0.

Not the answer you're looking for? Browse other questions tagged function-construction evaluation warning-messages compile or ask your own question.