In this post from several years ago: , it has been suggested that a "Globe" method is available for RotationControl.

That option doesn't seem to be documented anymore, although no error is reported on its use. Graphics3D docs still have a method RotationalControl" -> "ArcBall" (no idea what it is)

Another post shows how to use manipulate to stabilize the rotation.

I want to stabilize rotation of a globe or other 3D objects while viewing preferably without using any automation or manipulate. First I try it on a simpler example with two 3D shapes and it seems to have ignored the `RotationControl`. Assume that these objects are sitting on a turntable and I want to rotate the turntable. No other movement is allowed. Perhaps my usage of the command is not correct.

Code for the globe This code has adapted to work with Mma12.2 from a older post. 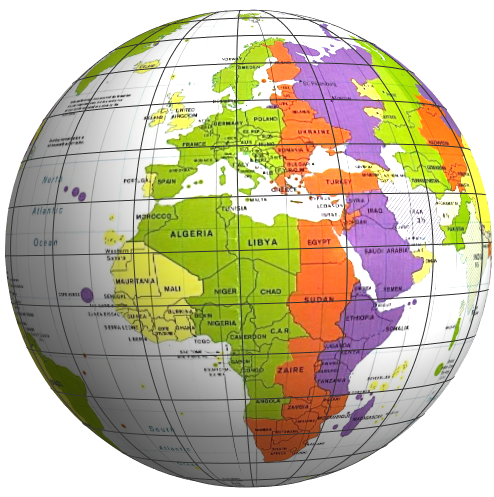 While plotting Graphics3D or other 3D plots, is there a way to stabilize/force rotation of an object along latitudes and/or longitudes or other axes? What method(s) and/or option(s) are available for this purpose with such commands?

I should have pasted the code and searched harder. I went searching in the SphericalPlot pages. Notice the two cursor modes on a Graphics3D output. At the edges the cursor is circular and near the center it is elliptical arrows. Spherical cursor is more restrictive in the movements that it allows.

Screen capture from docs shows that it is not working as stated. But I am not sure if there are more options that go with it.

Using an example from the docs. I would say the globe is slightly better stabilized and the spherical cursor has gone away on all these modes, but still plot can be moved in arbitrary ways. (Code is included below if reqd)

What I am seeking through the question above is options so that the globe can move as a "physical globe" along one axis or graphics items could seem to rotate on a turntable. Once again, I would like to thank Domen for his reply.

I have not been able to found any in-built way to lock the rotation of 3D graphics around one axis, so we will have to build our own solution. Let's use EventHandler to catch the movements of mouse, and then dynamically change the point of view via ViewVector and ViewVertical. We will use the natural tilt of the Earth, i.e. $23.4^\circ$.

To make the rotation more realistic, we will use the component of the mouse movement parallel to the equator. Rotation speed can be tuned with the parameter rotationSpeed, however, some additional calibration is needed if you want to make the globe rotate exactly together with the cursor. And to make everything more funky, let's use 🌍 as a mouse cursor (you can also use "LinkHand" or any other cursor you prefer).

I misunderstood initially what the question is really about, so I have provided a new answer above.

Firstly, the option is actually documented under Graphics3D (Options > Method > RotationControl). Secondly, you have a bug in your code: comma instead of an arrow in "RotationControl" -> "Globe". Thirdly, use "RotationMode" -> "SphericalRegion" to stabilize rotation.

Not the answer you're looking for? Browse other questions tagged plotting manipulate graphics3d geometry or ask your own question.

8
Synchronizing manual rotations for multiple Graphics3D outputs?
10
How to make a smooth revolution surface plot
2
Draw Vectors in Spherical Shell and Then Animate
0
Manipulate Cuboid for Rotation
2
Manipulate - performance during 3D rotation
3
How to automatically change plotting options for an array of plots?
3
Graph a cylinder moving in 3D