Mathematica 12.2 using only one socket

I am running some codes in parallel in a new computer and I notice that mathematica is using only one socket. 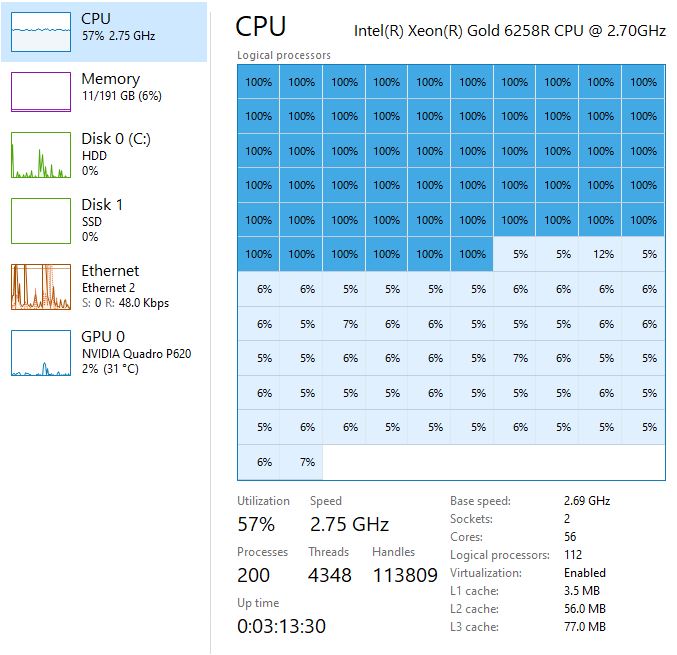 The computer has two sockets with 28 cores each one as in the picture but $ProcessorCount" is giving 28 cores and I have 56.

I tried to unlock processorCount and set a new value as described here but the problem persists.

I also tested some of the methods as in this post

We have another computer with an Intel Xeon ES 2660 also with two sockets of 24 cores each one and with the 12.2 version of mathematica and is working fine.... giving me in 100% all cores in a parallel operation...

Note: Hyperthreading is activated but I am using number of number of kernels = number of physical processors.

UPDATE: After the Szabolcs answers, the picture looks confuse. I have two sockets with 28 cores (total = 56 cores). In Preferences -> Parallell it says Number of procesor cores = 28. I can launch 56 or 112 kernels and the picture is always the same... the half, so for some reason Mathematica is not detecting the second processor.

any hint to solve this issue?

Note: In addition, before disabling hyperthreading where Mathematica was detecting only 26 physical cores. In the task manager-set affinity one group was disabled. I am not expert but I am not sure if in someway windows was limiting the number of cores.

I solved this issue by disabling hyperthreading directly from the BIOS. Now Mathematica is using all cores. $ProcessorCount is now giving 56.

Not the answer you're looking for? Browse other questions tagged parallelization or ask your own question.

18
Does Mathematica take advantage of hyper-threading (if it is available)?
10
Parallelization with two Processors: only half number of cores run