I'd like to perform a four-variable (symbolic) integration of myEq, so I'd like to simplify the process by separating out all terms that depend just on x1 and perform that integration over x1, and likewise for all the terms.

If the terms are all polynomial in the variables, then Collect might be useful. As far as I can see, though, if I use Collect[myEq, x1] (say) I still get terms that involve joint terms, involving, say x1 and x2 as well as x1 and x3 and x4. Moreover, I don't see how Collect is helpful for my problem of non-polynomial terms.

In short, what is the simplest way to take a complicated non-polynomial expression (e.g., trigonometric expression) and break it into parts that depend solely upon each variable and each conjunction of variables?

Break this into $2^4$ terms based on the minimum variables.

If there are $n$ variables, then break the expression into $2^n$ such terms.

You can do the following:

Essentially, we apply FreeQ to each variable/part combination to check whether that part depends on that variable. Doing this for each variable, we get a four long list of True/False for each part, which can be used for grouping. The rest is just some trickery to get the sorting right (if that's even needed). 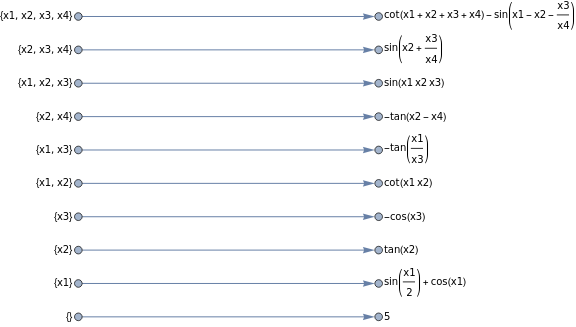 Not the answer you're looking for? Browse other questions tagged algebra or ask your own question.

0
Polynomial in Compact Polytope: PolynomialReduce with positive "poly" terms and zero remainder?
3
Rewriting a polynomial product into sums and differences of squares (a type of Lagrange reduction)
8
Simplifying simple signed expression ( such as $-x(x-1) \to x(1-x)$ ) based on assumptions
2
Solve for two variables but output second variable in terms of first variable