Create list of functions, domains, and iterate over (compare to Python code)

In Mathematica, I want to do a mass export of many different animated plots of specific functions with different domains. Because I don't necessarily want the plots to always have exactly the same range for each graph, (for example, -1 to 1 on X and -1 to 1 on Y), I want to manually specify this value for each function I create.

For example, in Python, I could do something like this:

And I would get the output:

Basically, I'm able to easily create an arbitrarily long list of functions and domains and then access them however I need to in the for loop. I'm sure that something similar is possible in Mathematica, I just don't know the syntax.

I could just create a list of single plot objects, I suppose, but there might be other aspects that I want to be the same between all of the graphs (such as the line color, axis font, etc.). So really it would be ideal if I could do it very similar to the way I did in Python where I only specify the aspects specific to each function $g_i$ and then force those into a plot object within the for loop so that only the function and range changes, but not the other arguments.

I don't know if Mathematica can do what I'm looking for, ideally in a way similar to what I presented in the Python code above. If so, does anybody have an example? 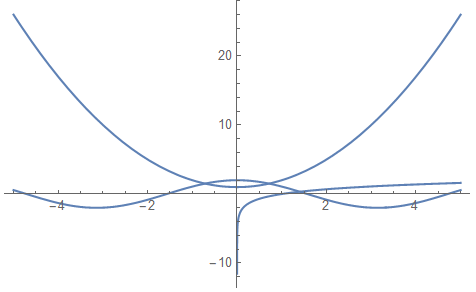 Actually, it's not recommended to do that in Python. eval is evil. You could use lambda.

Not the answer you're looking for? Browse other questions tagged core-language procedural-programming python data-structures or ask your own question.

0
Making a Double Loop with Specified Indices $(i,j)$
0
Save data from loop each determinate time
0
Nested For loops simplified
3
Encountering 'Error: Set::setraw: Cannot assign to raw object' during procedural function definition
1
How do I repeat the number of times a nested for loop does an iteration?
6
List comprehensions in Mathematica?
5
How to assemble Python abstract syntax trees (AST) in Mathematica?
0
Python recursive bisection algorithm to Mathematica