Manipulating equations into a certain form

I am a newbie in Mathematica, and I want to know how to manipulate and derive an equation. The equation I want to obtain is as shown on the image. I've tried Solve, Simplify, FindRoot, Expand, Reduce and others but I can't seem to find the answer. I included the code I wrote below.

Please kindly help me with this problem. I have been having similar problems but if I can manage to solve this one I think I'll be able to solve the others too. 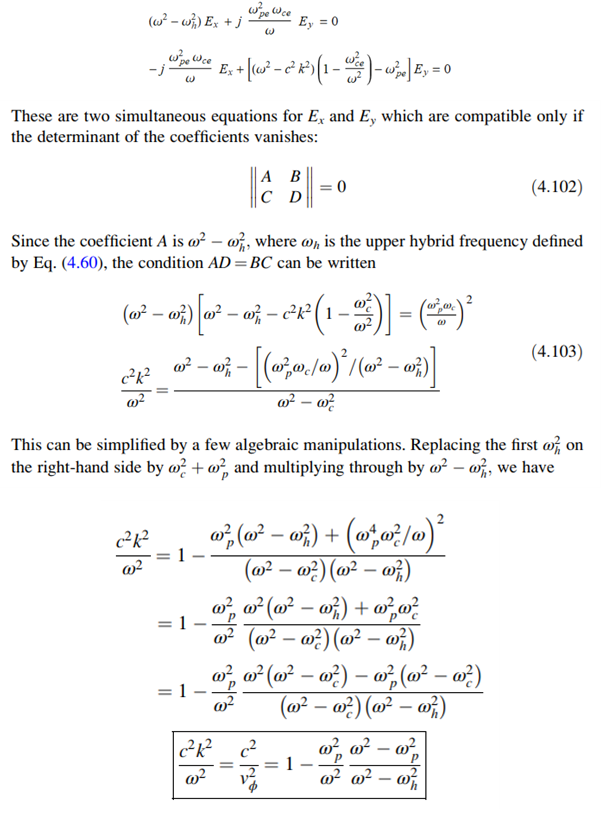 If j is intended to represent Sqrt[-1] then it is I in Mathematica. Assuming that is the case:

Are there any known constraints on any variables? Real? Positive real? Inequalities?

First of all, your Mma notations are different with respect to what you show as the image. For example, in the image you use \[Omega]ce and \[Omega]pe and then you pass to \[Omega]c and \[Omega]p. This is highly misleading and time-consuming to guess what precisely you have in mind. Please the next time be consistent in your questions.

Second, there is a special letter I that is reserved in Mma for the imaginary unit, rather than j. I corrected this by substitution:

The equation to solve is. It is convenient to replace c^2->x:

Let us solve it with respect to x:

Now, let us divide the both sides by w^2 and multiply by k^2:

Now, let us replace in the lhp x by c^2 and transform the rhp a bit:

with the effect of

It is possible to go to the end and transform it into the form you show within the frame in your question. However, it requires to introduce two new functions that may be somewhat difficult. I will do it if needed.

Not the answer you're looking for? Browse other questions tagged equation-solving matrix or ask your own question.

0
How to use `FindRoot` to solve an equation containing a parameter?
1
Solve for parameter value (complex) for zero determinant
2
Getting error message from NSolve
2
Unable to plot the determinant function (Possible bug in CoefficientArrays?)
1
Finding root of symbolic function
2
Solving an Algebraic Equation with Constraints on Multiple Parameters
4
Looking for a efficient way of solving a matrix which is function of some variable