Given a function f[x , y].
The definition of f is not self-describing. (f was defined with objects other than f.)
Then I want to construct a function g[x] such that
f[x,y] and g[x][y] are the same, and the definition of g does not contain f.

Looks okay so far but

The definition of g contains f. (fail)
What I want is a function h such that

I've tried Evaluate/Activate/FullSimplify, to g, but not worked.

Can you construct a function let's say, ToOperator, such that ToOperator[f] wil produce h ?

(ToOperator produces a warning message if the definition of f is self-describing. The generalization of ToOperator will be of course, multiple variable function as input + user choose some of those variables)

What you want is called "currying".

Not involving new operators you may try: 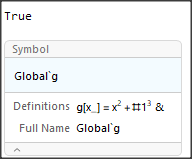 However, MMA has a special operator CurryApplied for this: 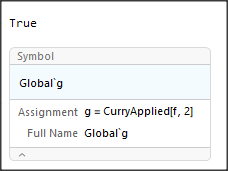 You may want to also look at OperatorApplied.

1
Pass the list of variables into function to change their values
2
Function where variable is integration bound
1
How to put a Hold on a variable so it can be set
5
Continuous non-piecewise equivalent of smoothstep function?
0
Use Alphabet[] as a variable in a function
4
Is it possible to declare functions that work for "other kinds" of arguments such as n-uples?
2
Construct really identical function (the same as Length)
9
Construct a pure function containing built-in 'Sequence'