For example, suppose I am given a set of points that forms a circle:

I use the Interpolation[..] Mathematica function:

First question. Is that solution right? Can I be sure that my $F(x,y) \ne 0$ on non-curve points if I add "an inner" point with non-zero value to my set? What solution is more preferable?

Also I have a second (and main) question. Due the peculiarity of my problem I need an explicit expression for my curve in a given section. In other words I want to have an expression for my curve in terms $y = f(x)$ or $x = f(y)$ (does not matter) between near points. I need this $f$ and its derivative $f'$. Thereby $f$ should be an InterpolatingFunction object too (but one-dimensional).

Using Solve on F from previous example does not give a result.

Also I can single out another explicit functions:

Together they form a circle.

The given curve is closed and has no self-intersections. Locally $F(x,y)=0$ can be expressed as $y=f(x)$ or $x=f(y)$. This is what I need. I try Solve function but it does not give result for interpolating $F(x,y)$. Instead it gives an error: "Solve was unable to solve the system with inexact coefficients or the system obtained by direct rationalization of inexact numbers present in the system"

Regarding your second question, f may be obtained in general via f=Interpolation[points]. Its derivative is given by f'[.3] (say) This, however, fails for your example because two points with the same x-coordinate appear (as it is a circle).

Perhaps you could explain what it is you're actually trying to do.

and for your F (that I randomly renamed to func)

In addition to that inner point, provide a bounding box (or other curve) with a constant value larger than 0. That way you will have an interpolating function that does what you want over a reasonable range.

You'll probably want to give more points on your curve. Here I double it to 32. 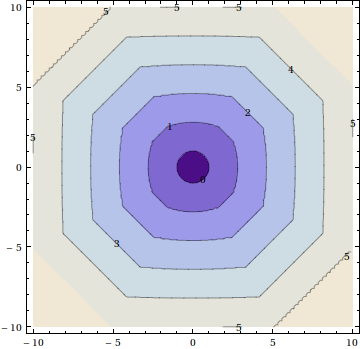 It's a bit fuzzy at some of the outer contours. No idea why; must just be a vagary of the plotting sampling. Setting the PlotPoints reasonably high helps to alleviate it visually, and shows that it is not the interpolation that is to blame.

17
Getting an InterpolatingFunction from a ContourPlot
3
How do I find out what a Mathematica function is doing (which numerical method it uses and how)?
13
smooth spline through airfoil coordinates
3
Issue with boundary Integration of FEM numerical solution (interpolation function)
1
Getting Explicit Function Definition from Interpolate and Visualizing Data