Is there way to get Mathematica to do a FourierDCT that is of mixed "type"?

To clarify suppose we have some data on a 2D grid that includes the boundary,

In this case we can do a "Type I" FourierDCT to recover the coefficients, i.e.

will produce a grid of zeroes, except at the (2,2) position.

Similarly, if we have a similar grid of data that avoids the boundary,

we can do a "type II" FourierDCT to extract the coefficients, i.e.

will again produce a grid of zeroes, except at the (2,2) position.

Now suppose we have a grid that in one direction includes the boundaries and in the other avoids the boundary,

I would like to be able to do a "mixed type I/II" FourierDCT that recovers the correct coefficients. The Mathematica documentation for FourierDCT does not mention this as an option, and naively trying

results in Mathematica asserting that the second argument should be 1, 2, 3, or 4.

Short of outright implementing a FastDCT from scratch, is there a way to do the mixed type FourierDCT using built in functions? 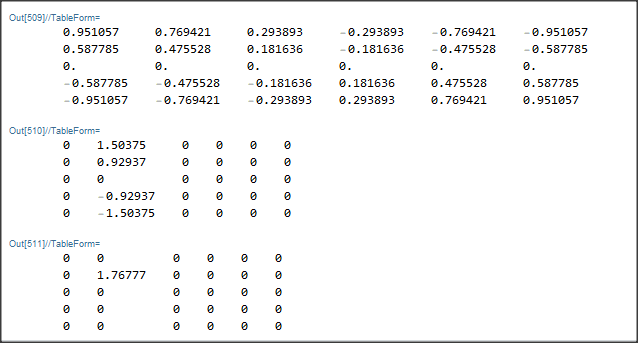 5
Precision loss in FourierDCT
1
How to Plot component frequencies, amplitudes and phases of a mixed signal