Mathematica 12.x: Don't use Accumulate or Differences on Around objects!

Bug introduced in 12.0 or earlier and persisting through 12.2 or later

It seems we've discovered a bug! The following is a summary of the problem and possible workarounds. Scroll down to ORIGINAL POST to see the original statement of the issue.

For now, my best solution is to create a symbolic TimeSeries to manipulate with Accumulate, Differences, Ratios, etc., and then use ReplaceAll to insert the Around data in the final step. I'm not using AroundReplace because that function took over ten minutes to process a single TimeSeries! But, one must be careful when using ReplaceAll in lieu of AroundReplace. According to the documentation,

[ReplaceAll and AroundReplace] coincide if each replaced variable appears once in the original expression.

One must therefore perform calculations in a manner that ensures this is the case. 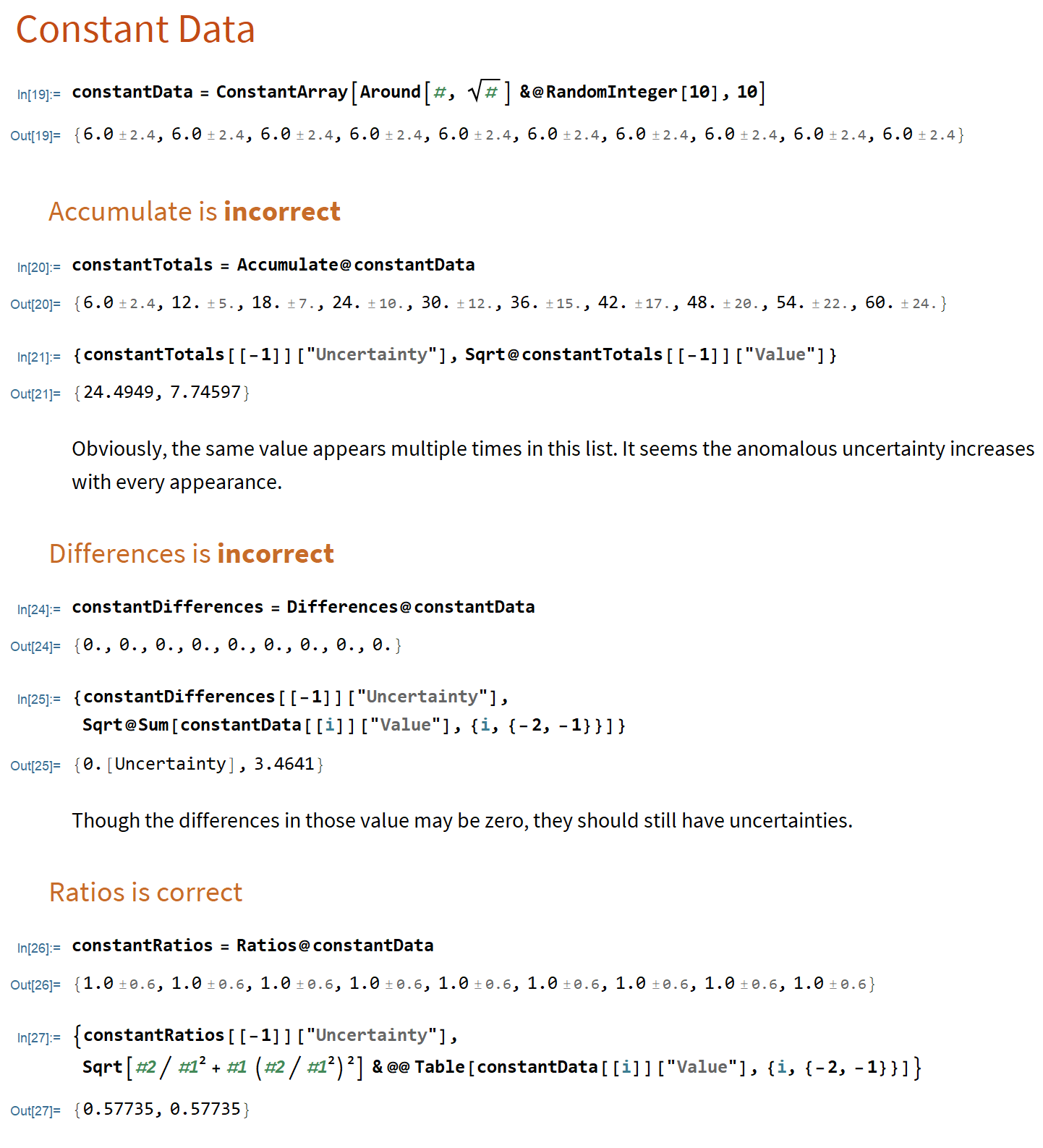 I don't have enough reputation yet to comment but I will note that Accumulate can be particularly tricky with TimeSeries objects. This is well documented elsewhere but, in short, Accumulate applied to a TimeSeries object will interpolate "missing" values if your TimeSeries is not, by default, what Mathematica considers to be "Regularly Sampled". There are good reasons "under the hood" why this is the default behaviour but it's a trap for users who are inexperienced with the quirks of TimeSeries

To get around this, you can specify that your TimeSeries object is regularly sampled when you create it.

For the purpose of this example, assume you have some data ready to be created as a timeseries assigned to xyz:

When you now run Accumulate on this newTimeSeries object, you should get values as expected...but you may break other functionality by forcing the TemporalRegularity to True if it actually isn't.

Not the answer you're looking for? Browse other questions tagged list-manipulation bugs error-propagation around or ask your own question.

0
Select over many lists with changing selection criteria
19
Error and uncertainty propagation: Is using Precision/Accuracy a sound strategy?
1
Cross checking lists and dropping points that do not belong
4
How to implement an integration filter on arrays?
6
Higher order Around, for large error propagation
4
Applying an exponential decay fit with uncertainties
6
Correlated uncertainties