When I do the sums as below, I get the expected answer.

You can use Defer to see how to properly enter your "summation" type notation.

You can then enter that output to see that it works. You must've entered something different.

I think it's because in the sigma form the two sums are treated as a double sum with different order as the expression case:

and according to the documentation, the sum for n will be evaluate first.

In multiple sums, the range of the outermost variable is given first.

So if we interchange the two sigma, it would work:

I'm using version 8 on Mac. Here is a screen shot: 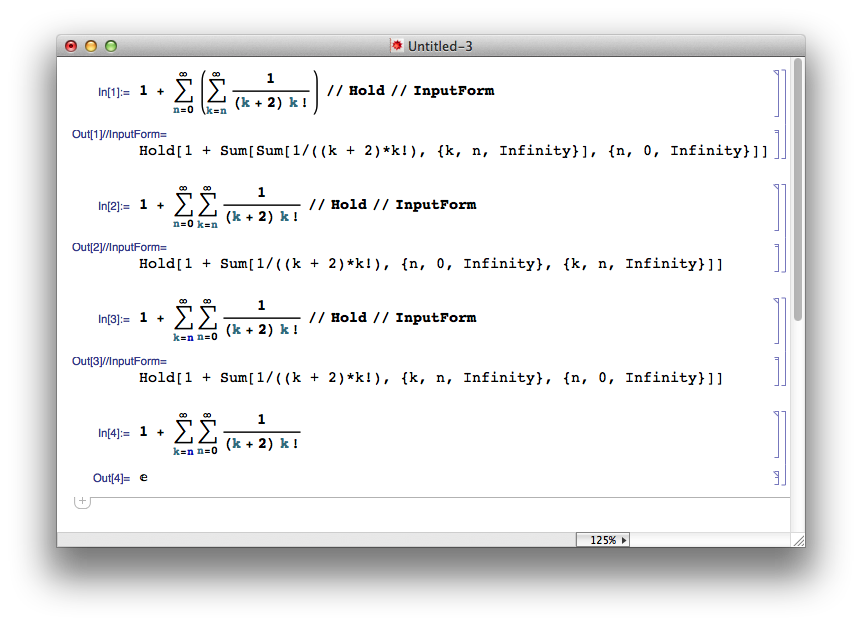 As we should expect the following identity (maybe under some certain mathematical assumptions, I'm not sure):

which we can confirm in Mathematica 9 by the examples say: 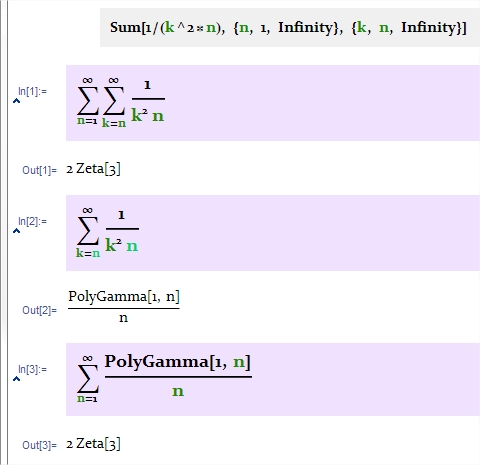 However, the nested-iterator version of the summation in the original question takes forever time in my Mathematica 9:

as Mark McClure said in answer above, and user0501 said in comment, evaluates quickly to 1 + E.

So for the " Why the difference? ", my guessing is maybe Mathematica uses different algorithms and strategies for this two different kind of summations, which eventually make the former one unable to reach the answer for OP's problem.

I believe it's a bug or something that in some Mathematica version exchanging the iterators works.

Have a look at the following snapshot taken from Mathematica 9:

The upper one, i.e. the iterator-exchanged one, has a lighter-green n under the most left $\sum$, which indicates it's a free global symbol, against the correct situation where it should be a iterator symbol with celadon colored. So $k$ gets wrongly out of the scope of $\sum_{n=0}^\infty$ here.

Not the answer you're looking for? Browse other questions tagged evaluation symbolic summation or ask your own question.

2
Problem evaluating a complicated integral
8
Understanding Dirichlet regularization in Sum
8
Calculating sum of BesselJ[n, x]
1
Sum convergence
4
How to approximate the partial sum formula of a summation to all real numbers using Mathematica?
0
Why is the function `SumConvergence` not valid for simple power series