I am trying to understand the concept of Vapnik-Chervonenkis dimension.

From https://www.cs.cornell.edu/courses/cs683/2008sp/lecture%20notes/683notes_0428.pdf, which is linked on the MathWorld link in a comment by the OP, I inferred that what was desired was the illustration of the following concept. I will us the interval $(-\infty, r]$ instead of the OP's notation so as not to conflict with the notation in the definitions:

VC-dimension of a set system is the cardinality of the largest subset of $A$ that can be shattered.

1D: There isn't much detail in the OP. If the set $x$ is the set of real numbers and $S$ is the collection of intervals $(-\infty, r]$, then the intervals may be represented by HalfLine.

Update: Here's a way to visualize the concept with NumberLinePlot and "plot $(-\infty,r]$":

There are several ways you can plot a function over an infinite domain, by coming up with a function that compresses that domain to a finite interval. 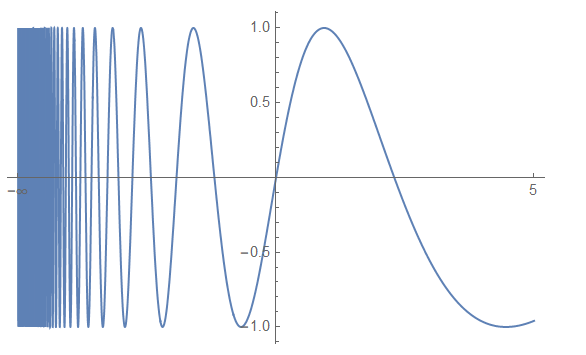 Not the answer you're looking for? Browse other questions tagged plotting graphics machine-learning or ask your own question.

3
Why does precision decrease after increasing PrecisionGoal and WorkingPrecision on this integral?

16
How can I transpose x and y axis on a Plot?
4
Collection of styles for Plot/ListPlot
2
Plotting eigenvalues in one plot for three different parameters
2
Plotting three sets of points
5
Cubes inscribed into a tetrahedron
4
How to resize a plot?
0
multivariate Gaussian distribution with identity covariance