I'm trying to find an explanation for the different sizes I'm seeing for fonts added to graphics in different ways, and haven't yet located an easy to understand explanation. Here's a minimal example: 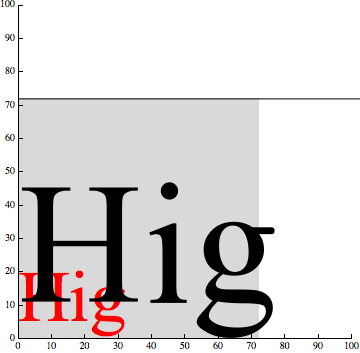 The red text doesn't change size when you resize the graphic, although everything else changes. The black text resizes along with everything else. But neither text seems to be the result of specifying 72.

After changing the screen resolution to Automatic following @Sjoerd's suggestion, I can see how the red text is basically displaying at a fixed size that's independent of Mathematica. In this picture, the left image shows 72 dpi, the red font is using 70ish pixels of vertical space. The right image is at 'Automatic' (so presumably 133.51 for my machine, according to this site, and similarly uses up 70ish pixels.

I'm still puzzled by the size of the black font, which doesn't seem to be related to the specified font size or to the screen resolution. Perhaps the PDF translation introduces another scaling factor.

The FontSize refers to printers points, which by convention are 1/72 of an inch. So the red 'Hig' is fixed to an external font size and will not scale with the graphic. However, you are right to say that this font size doesn't seem to be strictly 72 points... If you try:

a quick comparison with 72pt text generated in Illustrator shows that the fontsize is ~51 pts or ~30% too small (the Mathematica 72pt text is on the right): 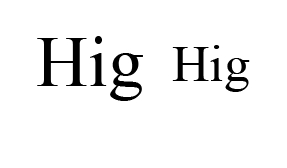 I have no clue as to why Mathematica text is too small....

Your second block of text is converted to a scalable graphic by the ImportString[ ExportString[Style[...], "PDF"],"TextMode" -> "Outlines"]]] transform. Enclosing this routine in FullForm demonstrates that the text has been converted into a FilledCurvecomprised of nested lists (i.e. is no longer treated as text but rather as a scalable graphic element). As a result, it is scaled with the units of the graphic.

Interestingly, even when scaled, the size disparity persists, as can be seen if you resize your graphic such that the red and black text overlap, then the grey square is approximately one inch wide... 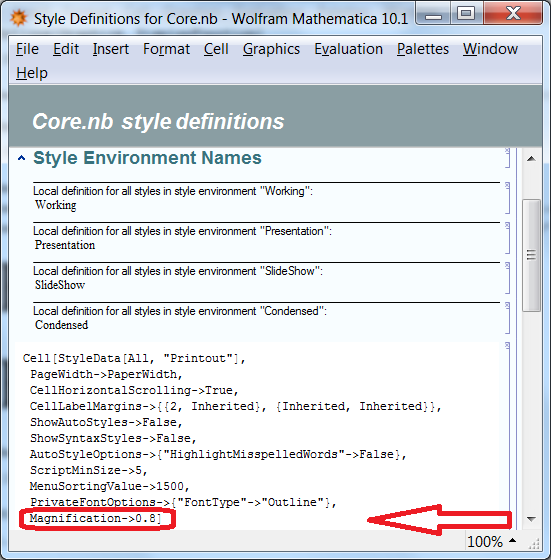 It is possible to override the value of this option by setting it explicitly via Style:

We can check that the outlines and the text have identical sizes:

A step-by-step explanation HOW it works:

The combination of these factors gives us the situation when each unit on the plot corresponds to one pixel on the screen and is equal to one printer's point of displayed glyph (when Magnification is set to 1). So we get identical sizes of the glyphs and outlines. But when we turn on the Frame we add extra paddings and the coordinates no longer correspond to printer's points:

I will not duplicate geordie's explanation of the scaling-with-graphics-resize part of the question.

The reason the displayed font looks too small is the setting of the "ScreenResolution" option (part of FontProperties) to 72, which used to be the default for decades, but is incorrect for most screens nowadays.

you'll get a better match. Compare the default setting 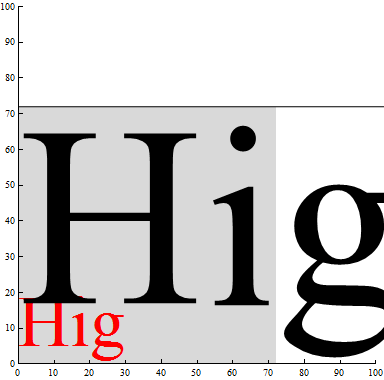 with the Automatic one on my display 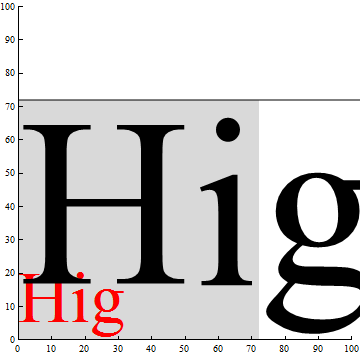 Not the answer you're looking for? Browse other questions tagged graphics fonts or ask your own question.

24
Fontsize is too small
23
What is a printer's point?

24
Fontsize is too small
8
Trouble with fonts when exporting a 2D-plot to vector formats
12
Automatizing PSfrag export
11
How can I scale a plot in vector graphic or PDF form?
4
How to change the font color and size of tick labels by default
12
Texture or shading to avoid requiring color printing
4
Converting a list of colors into an image
7
Mathematica Global Menu Size