Edit only for those interested in large deflections of beams

I discovered a mistake in the equations of the original question (below): in the normal force (compression/traction) n[s_] = EA*u1'[s]; the measure of stretch should not be u1'. The answers were very instructive in terms of numerical methods, nonetheless.

Actually, I thought the equations of beams under large deflections would be easy to derive as an ODE. I now believe that in the general case, there is no simple explicit ODE to solve; instead the weak form can be projected directly on a mesh.

However, for thin beams undergoing mostly bending (no stretching), the problem can be solved pretty simply (the equations are nicely derived in "Large deflection states of Euler-Bernoulli slender cantilever beam subjected to combined loading" by Žiga Gosar and Franc Kosel, for instance). Numerically speaking, it seems to be much simpler to solve for the rotation field first, and then for the displacement field, rather than seeking the displacement field directly as I did below.

So, for those interested in large deflections of thin beam without stretching, these are some equations you could use: 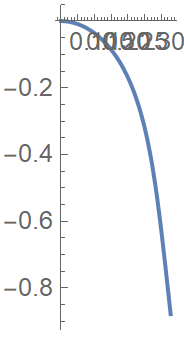 Now, back to the original question

Here, I would like to find the shape of a clamped-free beam (for instance) with large deflection due to gravity; consider a sheet of paper with one clamped edge for example.

This question also tries to address large deflection, but in my case, gravity couples axial and transverse displacements fields, plus I don't have a constraint on length.

The corresponding curvature and local frame are given by:

Then, with Euler-Bernoulli kinematics, the internal tangential force field n and internal bending moment field m are given by:

Then, the gravity is projected into the local frame:

The third equation in eqs can be used to eliminate v:

NDSolve::ntdvdae: Cannot solve to find an explicit formula for the derivatives. NDSolve will try solving the system as differential-algebraic equations.

NDSolve::bvdae: Differential-algebraic equations must be given as initial value problems.

Any idea on how to solve this system?

Note It might be reasonable to neglect some terms (especially the squares of first derivatives) but NDSolve returns the same error.

xzczd suggested using his function pdftoae but I did not manage to make it work for my system of ODEs.

Actually this system can be solved with NDSolve with some efforts. We use 3 equation:

With this function we calculate initial data at s=1

Finally we visualize solution and compare with pdetoae solution

Let me add a solution based on finite difference method (FDM). I'll use pdetoae for the generation of difference equations.

NDSolve "cannot solve to find an explicit formula for the derivatives", because only one of the two ODEs is fourth order, as can be seen by determining the positions of {u1''''[s], u2''''[s]}.

Indeed, there are no fourth derivatives in eqs[[1]]. Nonetheless, some progress can be made. For convenience, define

which moves all terms to the left side of the equations and then discards == 0. Next, obtain the highest order derivatives in each expression.

The similarity of these two terms indicates that the fourth derivatives can be eliminated from eq2, as follows.

Although the resulting expression for eq21 is too long to reproduce here, inspecting it using

verifies that the the fourth derivatives terms indeed are gone. Moreover,

runs for a while without error but eventually crashes as it searches for a boundary value solution. Having a rough guess for the solution probably would yield an exact solution.

Not the answer you're looking for? Browse other questions tagged differential-equations equation-solving numerics physics boundary-conditions or ask your own question.