I have an equation

I want to do this issue: T(dV/dT)-V=0 and obtain T that satisfy this relation. How can I do it? we should at first obtain V and then Drivate it. How can?

This is an equation of state. This is extensive since it does not depend on n, the number of particles. This is homogeneous in the sample. Just one composite. The second equation is easy to solve. Separation of the variables Ln[V]=Ln[T] and the respect to the starting conditions.

One the other hand the second equation show some dependence abstraction, since for polynomials the differentiation with respect to T leads to a loss in the power of T, the multiplication compensates for that. TdV/dT=T V'[T] for V[T]=const T works to replicate V[T]. 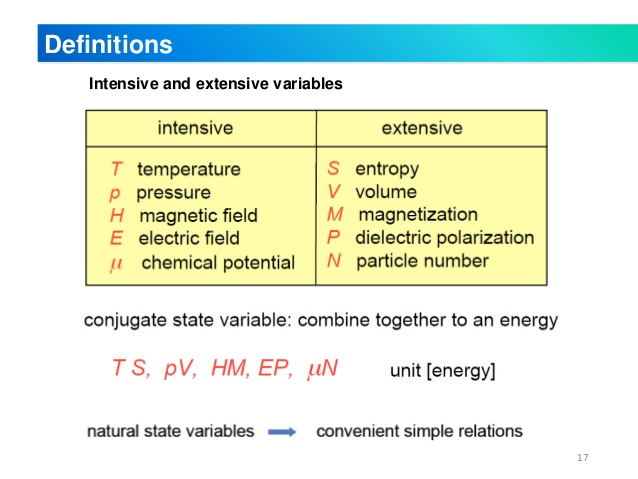 The equation of state does not offer such a simple relationship. It can be solved for V as a function of P, T, a, b that are rather complicate. Differentiate that to T make the rational polynomials even more tedious to work with.

The equation of state has then to be solved for T to simplify the representation. This can not be done since a[T] is an arbitrary function of T.

The second equation stems in a slightly modified form from the same page: Charles's law or Law of Charles and Gay-Lussac (1787).

On the other hand, it looks like the Coefficient of thermal expansion but without the restriction for p. And this third parameter is for the best answer the question that remains. In this openness, a look at Thermal_expansion for technical, chemical important cases might help.

Another view worth is State_function.

Not the answer you're looking for? Browse other questions tagged simplifying-expressions chemistry equation-solving or ask your own question.

4
Solving cubic equation for real roots
0
Solving One Equation with Two Variables
1
Solve an algebraic equation
0
NSolve/FindRoot matrix equation and conditions
1
Solving an equation with 3 free parameters in a way that satisfies a condition
1
Numerically solve equation
0
Solving a system of Non-linear equations by Fixed Point method or Newton Raphson method
1
Plotting/Solving one equation in two variables
0
Solving an equation, and verifying that it is correct