Consider a set of points generated via Lloyd's relaxation algorithm 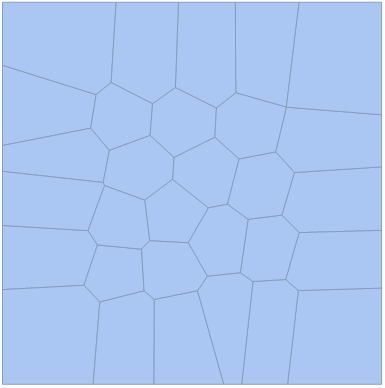 Then, if I wanted a more "realistic" mesh and exclude the boundary cells, I could get something like this 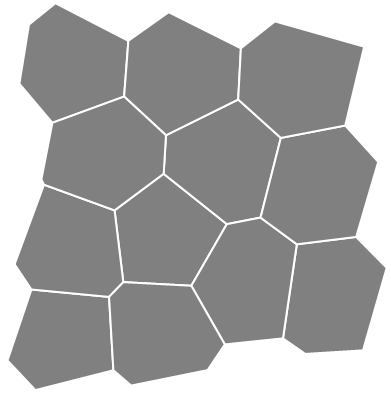 Now, the problem with this approach is that I can't get the exact number of interior cells that I want (same as this approach). It will always depend on which cells touch the boundary (or "Frontier", as it's sometimes used) and which don't. Now, an alternative way is to consider a periodic mesh, and in that case we get 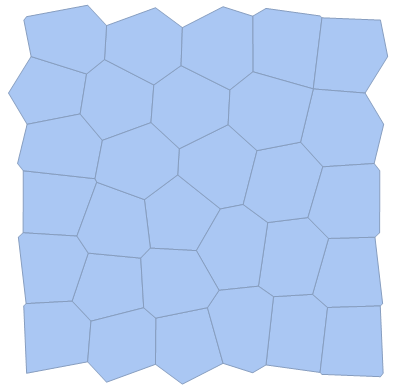 This seems to do the trick (despite some occasional problems with rel), but it still has the problem that it is only considering periodic meshes.

My goal: Given a number n, generate a roughly square mesh of similar "realistic-looking" cells, in the sense of the examples above. For instance, I think it would be enough to simply fix the mean and variance of the cells area and perimeter, such that the tissue has a "uniform" look, and no "spiky" cells appear. I'm sorry for the over-usage of " ", but I'm ok with slightly different mathematical descriptions, as long as I get a mesh with a similar look to the ones presented above.

On top of that, if the mesh moves (as seen here, for example), I want the cells to be able to move accordingly (so that suddenly a cell doesn't become a frontier cell and disappears, which could happen in the first approach). Naturally I could draw the cells, but I want to specifically use VoronoiMesh and avoid periodic meshes.

Following the discussion in the comment section with @TumbiSapichu, I've found a possible solution to this problem. As mentioned, instead of translating the seeds, we could simply add more points, enough so that, upon drawing a rectangle centred in this new mesh, you simply pick the first n cells which seeds intersect the rectangle, with increasing size, until the n threshold is met. The following code does what I want, where n = 36 is simply selected so that we get an approximate $6\times 6$ lattice 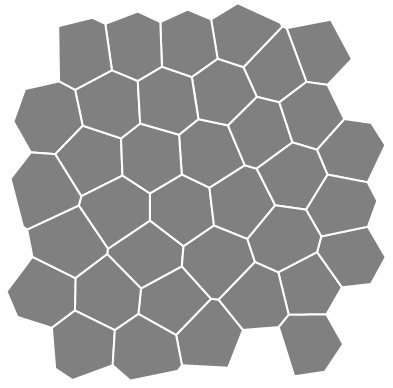 In fact, there is no limitation as to the shape of rt. Considering more cells and taking rt to be, for example, the disk 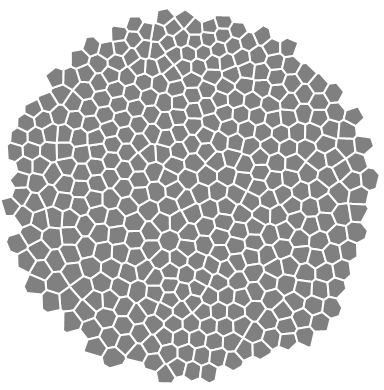 Notice that the radius increments become more sensible for higher value of n and therefore should be adjusted accordingly to avoid counting too many cells.

Just as an interesting observation, the disk case can be replicated using the following code

Anyway, this seems to work fine for relatively small n. As suggested by @TumbiSapichu in the comments, fixing a cell frame and letting only interior cells move and update via Lloyd's relaxation algorithm could prove another, and perhaps more efficient, way of doing this. Let me know if you have any comments or improvements.

Not the answer you're looking for? Browse other questions tagged graphics computational-geometry mesh or ask your own question.

13
Lloyd relaxation on VoronoiMesh
15
VoronoiMesh without edges
14
Ordering Problem With VoronoiMesh
12
Boundary cells of a mesh?
4
How to draw random colorfull domains in a plane?
8
Generating a Periodic Voronoi Mesh