How to solve the Monty Hall problem?

For purely recreational purposes I would like to solve the Monty Hall problem with Mathematica using the function Probability (dedicated to the calculation of probabilities).

About the Monty Hall problem and its solution

Here is a possible formulation of the famous Monty Hall problem:

Suppose you’re given the choice of three doors: behind one door is a car, each door having the same probability of hiding it; behind the others, goats. You pick a door and the game organizer, who knows what’s behind the doors, opens another door which has a goat. They then says to you: “Do you want to pick the other door?”.

Is it to your advantage to switch your choice? Or more precisely: what is the probability that the car is behind the other door?

This is a well-known probability problem, and its the solution may sometimes appear counterintuitive. The answer being: yes it is advantageous to switch your choice, the probability of finding the car behind the other door is $\frac{2}{3}$.

We can then consider that door 1 has been opened by the organizer (thus discovering a goat behind it), while denoting this event $O_1$. To determine the probability that the car is behind the other door (door 2), we can calculate the conditional probability using the information we’ve just obtained:

One can notice that the same reasoning applies regardless of the door chosen initially and the door opened subsequently. We can then conclude that the probability of finding the car behind the other door is always $\frac{2}{3}$.

My attempt to solve the problem with Mathematica

Obviously, it is very simple here to simulate the situation with Mathematica a large number of times in order to obtain the probability numerically. But I’m trying to solve the problem analytically using the function Probability to get an exact result.

I therefore took up the situation described above: the door 3 has been chosen, and the door 1 has been subsequently opened by the organizer, and we want to determine the probability that the winning door is the other door (door 2). So I tried:

Unfortunately, I don’t get the expected result:

I think I understand why Mathematica comes up with this output: it simplifies the expression after \[Conditioned] to o == 1 && c != 1 and eliminates information about o (since it considers the variables as independent) thus leading to the aforementioned result.

Thenceforth, I am not sure how to model the problem with the Probability function in such a way as to correctly express the link between the winning door and the opened door.

I've looked into this myself and I don't think the problem is with Mathematica. The problem is how to represent the choice of the host. Here's an attempt I tried:

So the basic idea here is: I pick a number between from 1 to 3 and so does the car. The host picks randomly between the numbers 1 and 2 and adds that number (mod 3) to mine to pick a different door than I did. Then you condition on the host's number not being the car.

So what does this give? 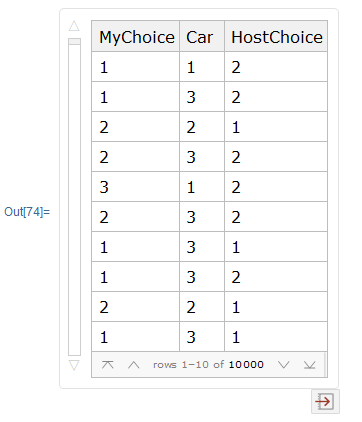 I'm turning the numbers into Assocations for making the code more readable. So let's do some counting:

Ok, so maybe Probability wasn't wrong after all. What we're seeing here is the real reason why the Monty Hall problem is difficult: the outcome depends crucially on how you model the behaviour of the host. In this description it is -in principle- possible for the host to pick the door with the car. We just condition that possibility away.

But this is different from the actual behaviour of the host: If you pick the door with the car, the host selects randomly between the two remaining doors. If you don't pick the car, the host doesn't pick randomly at all! This is where our calculation breaks down: we always assume the host picks between two doors, but that's not how it works and that's why the Monty Hall problem is trickier than it appears, even when you think you understand it.

To put it succinctly: the line hostChoice \[Distributed] unif[2] is plainly wrong. The host's choice is a combination between a deterministic choice and unif[2] that depends on myChoice.

As for the question how to reproduce the correct answer with Probability and Conditioned: I don't think that it's possible to represent this type of conditionality (i.e., the distribution of one random variable depending on another random variable) with the tools currently given. The only thing that comes close is ParameterMixtureDistribution, but I don't think that will help here.

I'm happy to let you know that I actually did manage to squeeze Monty Hall into ParameterMixtureDistribution with some torture. First of all, we will need to be able to define probability distributions such as "a random choice from the numbers in a list by weight". I defined such a distribution as follows:

Now we can define the mixture distribution of my choice, the car and the host choice as follows:

I know that this is not what you want, but for completeness I'll add a Monte-Carlo version:

Try it out a million times for three doors, and see that I find the car in about 2/3 of cases:

More generally, in a game of $n$ doors where the organizer opens $k$ goat-revealing doors and I am given the option to switch, my probability for finding the car before and after switching are

respectively. As $P_{\text{switch}}(n,k)>P_{\text{no switch}}(n,k)$ in all cases, we should always switch after the organizer's goat-reveal.

I would like to present my version of code for simulation: