Finding lower boundary of a 3D object in list format

I have the following point list and would like to find the points located in the lower boundary of the 3D object (It is part of a body torso).

I am using the following script. However, in the end it shows just one point which is not correct. I think the reason is that the lower boundary points are not aligned with a straight line. Any help is really appreciated.

I think I've found a method that could work. The idea is to make a MeshRegion out of your points and then find all of the polygons with similar face normal vectors. The normal vectors can be computed with MeshCellNormals as described in this answer:

So now we have all of the polygons and clustered them into groups and we just need to figure out which clusters correspond to the top and bottom of the torso. In my case, it turns out that clusters 1 and 3 are the ones I need: 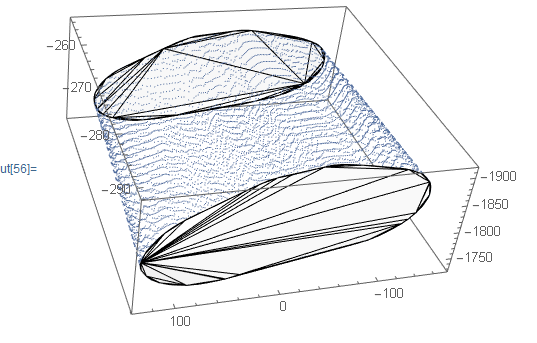 To get the points defined by these polygons (say, the ones from cluster 1):

Check that these points are all members of Data3D:

The OP indicated that there seems to be some issue with the computation of the normals. It's possible that some of the polygons of the mesh are very tiny and the normals cannot be computed or something. The first suggestion I have for this is to try

to see if that helps. If that doesn't work, it's worth investigating the normals computed:

If the number of non-numeric vectors in normals is fairly low, you could consider throwing out the problematic polygons:

From there you could continue with:

and see how you get on.

Not the answer you're looking for? Browse other questions tagged list-manipulation graphics regions mesh or ask your own question.

1
Generating a boundary mesh from a list of points
1
BoundaryMesh: correctly pair boundary points with normals
4
Filtering nested lists while maintaining the list level
2
Retrieving boundary points of concave hull (or alpha shape) in 3D
0
Find x-intercept when maximum slope of tangent intersects a point
2
Finding points located in a specific locations of a 3D objects
0
How to add a removed element to the associated sublist after manipulating a list
0
Select the surface points of a body on a cubic lattice