Using Geo commands, how do I get a list of cities that all meet the following criteria

How do I write up the code that gives a list of cities that meet three criteria? 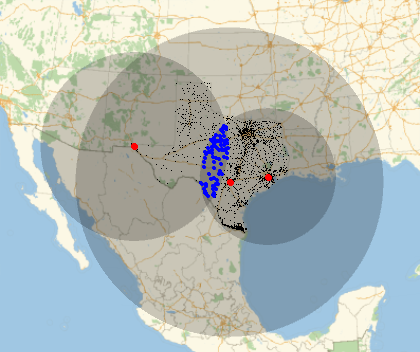 You can see from the following code that there is no point where the three circles intersect. If you want cities within those circles, though, the San Antonio requirement is redundant: as you can see, the intersection between the Houston and El Paso disks is the region of interest: 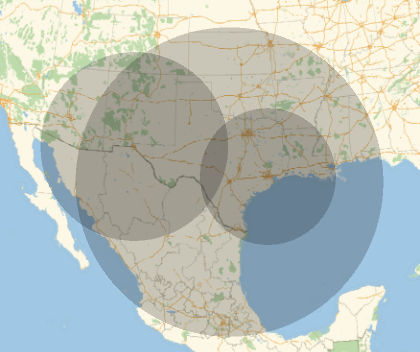 One would hope to calculate the intersection of those regions, then lookup cities in that region. Unfortunately, however, there is no GeoRegionIntersection function (see Find the GeoArea of overlapping GeoDisks and GeoArea of an Intersection).

A second approach would be to get the list of all cities in those two relevant regions, then take the intersection of those lists:

... and a similar one for El Paso (let's call it elpaso). Unfortunately again, though, that command times out for me; it does work for a smaller radius (e.g. 20 miles or so), so it must be a humongous list and my system / connection chokes on it.

If you are able to get the lists above, then Intersection[houston, elpaso] would do the trick.

Not the answer you're looking for? Browse other questions tagged geography or ask your own question.

4
Find the GeoArea of overlapping GeoDisks
3
GeoArea of an Intersection
1
How to compute a list of cities within a given radius of another city?

2
How can I make a map of Sierra Leone at the district level?
16
Administrative Divisions bordering a geographic region (e.g. an ocean)
2
How do I get a list of all the wine producing countries using V11?
1
How can I list the capital cities ending with video?
7
Find distance along a path (GPS coordinates)
4
How to extract geo location of city and plot the map
0
How do I write a tooltip for this list of cities?
1
How to compute a list of cities within a given radius of another city?
3
How to determine population from a list of arbitrary jurisdictions (cities, states, counties, et al.)?