How to change indent in notebook input cell without shifting the whole code to the right?

This is easier shown in pictures. I like to have large indent for If and Do etc... to make it more clear. But the option LineIndent increases the indent for the whole code to the right, and very little for the stuff I am interested in, which is If, Do etc...

The default LineIndent is 1. Here are 3 pictures showing what happens when changing this from 1 to 2 to 3. Notice how the whole code shifts to the right. I do not want this. I want only to change the indent of these constructs above, inside the code. But without that initial indent added. Even though the indent for If has increased, but it has not increased by same proportion as the whole shift that happens. 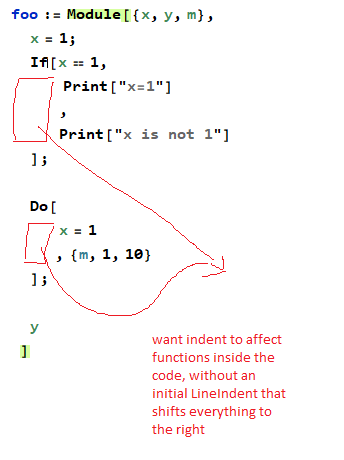 To get close to the above using LineIndent this is the result. You can see how much the whole code shifted to the right due to that initial indent, which I do not want 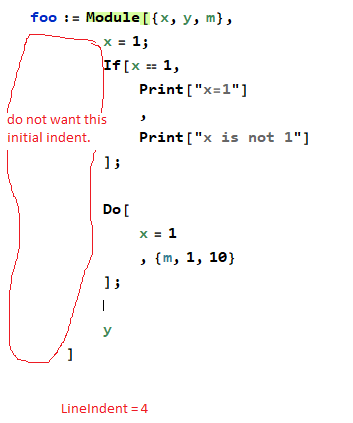 I played with some of the options in option inspector, but can't figure which will do what I want, if any

I know I can use code cell and do my own formatting, but code cells have its own issues as well.

Is there a setting that will change line indent, but without adding that initial indent? I do not like the whole code shifting so much to the right.

Here is the code used above

I use the Code cell style rather than the Input cell style when I want complete control over indentation and formatting. On a Mac, it is Command-8 for Code and Command-9 for Input.

Not the answer you're looking for? Browse other questions tagged front-end formatting or ask your own question.

44
Is it possible to change the colors of the highlighted code in the Mathematica frontend?
15
How to copy code out of notebook to an external text editor without extra line feeds being added?
0
How to make the default table alignment "right"
7
How to highlight the whole selected cell
4
Keyboard shortcut for changing style of selected text (NOT the whole cell)
3
How do I change the size of the font for the output of the Print[] command?
12
How to change the font color of a variable in whole input cell
4
How can I set the style of one Output cell so it doesn't change after re-evaluating its Input cell?
2
How to select Input|Output Cell Groups in the Notebook?
8
Change default cell type of Wolfram|Alpha Notebook Edition to Input