Fonts not rendering correctly on the cloud

There are a number of issues that I encounter when I try to use my own stylesheet and publish on the cloud. The document looks great on the Mathematica running on my desktop. But when I publish to the cloud, lots of things break, especially with regard to fonts. This makes publishing to the cloud unusable currently for me.

Here is the first problem. This code snippet creates a simple notebook containing a cell of style "MyText", which it then publishes on the cloud.

Here's how it looks like on the cloud, in Google Chrome. Note that the math is rendered differently.

If we open up Developer Tools in Chrome, we can try find out what is going on with the math glyphs: 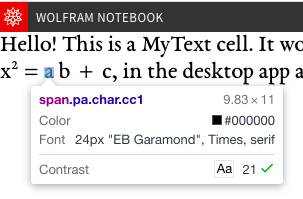 By the way, I wish it were possible to make Mathematica render all math --- including inline math inside text blocks, made using Ctrl + ( and ) --- with a fixed specialized math font, like the STIX fonts. Let prose fonts be handled by prose fonts, and leave math to the specialist fonts.

Update. If I add the SingleLetterItalics -> True option to the Cell, then I get the following result in the cloud on the browser:

then all is fine. By the way: I think in Mathematica there should be no italic single letters, since it is not asked for in the StyleData of "MyText". It might have to do with unclear inheritance issues ("design") of the Stylesheet mechanism. But I am not sure. Call Wolfram.

7
Publish to Cloud with accompanying stylesheet

19
Monospaced fonts are not monospaced
7
Why my cloud application failed to display manipulate element correctly?
1
Magnify in the cloud
9
Which fonts are supported in Wolfram Cloud?
16
Sharing data via the cloud
11
What's the Wolfram Cloud missing?
4
Cloud notebooks not loading/creating/opening
1
Fonts in Mathematica