I am quite new to Mathematica and not completely familiar with functional programming. I am currently working with a function (call it foo) and wish to change its behaviour, for example, by adding 1 to its output. Obviously writing

leads to an infinite recursion as soon as I try to evaluate the function. To be more explicit, if at the beginning foo[1] returns 1 and foo[2] returns 3, I would like the output to be 2 and 4 respectively after the change.

Is there any way to easily obtain this behaviour with Mathematica?

I apologize if the question is a duplicate, but I did not find anything similar already posted.

If you absolutely have to use the same name for the function, and add new behavior, then you have several options. A special device invented for this sort of situations is called Villegas-Gayley technique. In this particular case, it will look like

where the last definition is the one which alters the behavior. You can test:

However, this won't always work. For example, this won't work if your function has been defined specifically on these values:

The reasons for that have to do with the relative specificity of various patterns, and the fact that a function defined on specific values has a different (hash-table - based) representation which is hard to override.

In this case, I suggest to use a rather heavy-handed approach I described here. Using functions from it, we have:

However, best would be to reconsider your design and needs, since chances are that you don't really need any of these methods, and can find a solution by more traditional means.

Do you mean you need to update the definition of the function in terms of the previous definition? I do not get infinite recursion when doing the following: 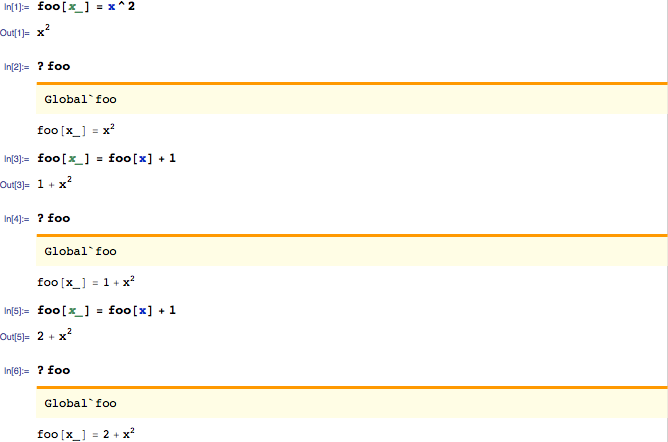 Make sure x has no assigned value when you do this, and use = (not :=) to allow the previous definition to expand.

All this said, it is not a good idea to do this in most cases, and there should be alternative solutions (depending on the problem).

Not the answer you're looking for? Browse other questions tagged functional-style recursion or ask your own question.

1
How do I extend (prepend or append to) an existing TagSetDelayed rule?
540
Where can I find examples of good Mathematica programming practice?
23
Making a symbol's new definitions be tried before all previously defined ones