New to Mathematica. I want to be able to input some parameters, do some calculations, and end up with some output in a functional form such as:

with coefficients a,b,..., then I want to use Manipulate to plot f as a function of x automatically and control these coefficients a and b with sliders without copying the functional form or the sliders (i.e. {a, 0, 1}, {b, 0, 1},...) into the argument of PolarPlot and Manipulate:

For example, I want to do something like this:

And thus for a different set of inputs to the code and a different function f being generated, let's say now including coefficients a,b,d,c,e the code still generates the plot of f(x), but now with sliders for a,b,c,d and e.

Any advice here would be greatly appreciated. Thanks.

Please try this code. Assuming it works for you feel free to ask for clarification as needed. 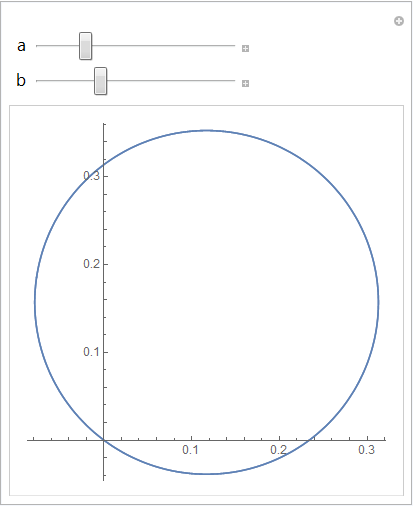 Not the answer you're looking for? Browse other questions tagged plotting functions manipulate variable input or ask your own question.

18
Mathematica Manipulate with macros AND variable number of controls (persistence desired)
4
Plotting a parametric function with three input variables
3
Why doesn't variables take value from manipulate?
10
Using Interval Slider in Manipulate for Plot Functionality
0
"Input" function for when someone was born
0
How to change a previous manipulate to include a condition for even and odd
0
Plot interpolating function depending on free variable inside manipulate
1
setting slider for multiple sets of manipulating variable Manipulate
2
Function does not take many inputs, and cannot plot correctly using Listplot