Problem with Solve and PrimeZetaP

I assume this is something to do with limits on numerical precision, but can someone explain the difference in output between these two Solve problems:

Solve was unable to solve the system with inexact coefficients or the system obtained by direct rationalization of inexact numbers present in the system. Since many of the methods used by Solve require exact input, providing Solve with an exact version of the system may help.

Obviously, I've hit some kind of threshold - but what and why?

Following @Artes's suggestion below, I tried

Clearly, this works. But now this...

There seems to be a threshold (call it t) somewhere in the region 1.434 < t < 1.44 where it becomes impossible to obtain a result, as this table shows:

Further thoughts, anyone? The error messages suggest I should use Reduce - but I'm not sure how to apply it in this instance; If I use Reduce[PrimeZetaP[s] == n, s] in the table above, I get nothing.

To get an initial estimate for FindRoot, find a fit for values of {PrimeZetaP[s], s}

Looking at the fit 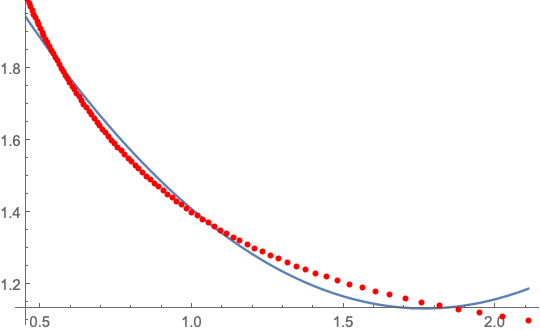 Not the answer you're looking for? Browse other questions tagged equation-solving special-functions number-theory prime-numbers or ask your own question.

99
What is the difference between Reduce and Solve?