I am trying to integrate a figure composed of a piecewise parametric curve with both ends bound by a straight, vertical line segment. I have displayed the curves on top of each other using the Show function because I could not display the straight line using the ParametricPlot, code shown: 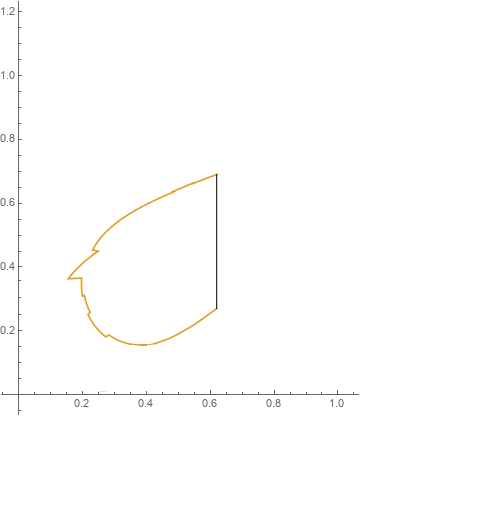 However, now that I am trying to find the area within, I cannot figure out how to accomplish it. I have tried creating a Region, but the issue of one curve being Cartesian and the other Parametric seems to prevent mixing them successfully, despite Region accomodating multiple elements. For the same reason, I cannot use a ParametricRegion. What methods would facilitate creating a closed area that would allow me to then take the area, whether using the Area function on a type of Region or by taking an integral? Do I instead need to apply RegionUnion or rewrite my straight line in a very ugly parametric form, and figure out how to include it?

I think you're going about this in such a way as to make this harder than it is. Polygon represents a closed curve where the final point will connect to the first by default so we can just use that here. No need to add a line or anything.

The way this will work is as such, first get a tabular set of your noisy data. I'll do this in a slow way (with lots of RandomReal calls) but if possible vectorize your generating function to make it fast. 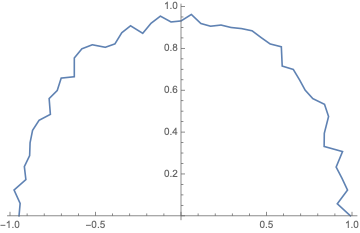 We can see that this data was properly ordered from the get-go, but that's not a given, so you can use FindShortestTour to force an ordering if you need to. Then simply use Polygon to wrap this data and it can become a Region: 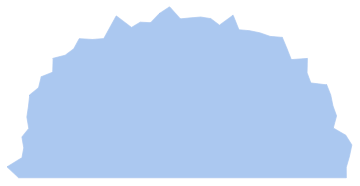 At this point all the built-in stuff like Area will work:

Not the answer you're looking for? Browse other questions tagged regions parametric-functions plotting or ask your own question.

0
Parametric Region Plot
1
Plotting confidence region for empirical interpolated curve
3
ListPlot two matrices on the same graph and shade the region between them
0
Finding the contour of a pair of multi-variable functions
8
Finding the point closest to a parameteric curve produced by a numerical method
2
Trouble with Calculating Area of Parametric Region
1
Reduce spacing between legend entries using Show
3
How to divide a region in FEM with a parametric curve?
5
Plotting regions with 1D and 2D components
3
Create region bounded by parametric curves